Moxie to the rescue! 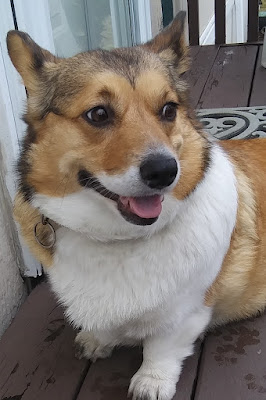 I set a little stool by the back car door so she could get into the car, and all went well. Then I thought I would just get in the car and sit with her in the backseat for a little while so she could get calm and used to it before we tried to get out. So, I shut the back door and we sat and cuddled for a while.

When I tried to open the door, it was locked, and I didn't realize that the child lock button had been activated in the front seat by my husband. So, I was locked in the car and no phone. With the headrests in the way I couldn't lean far enough over the seat to open the front door. The only way to get out was to climb into the front seat.

I got one leg over and when I tried to shift my body and get the other leg over my first leg was somehow pinned under me and I was stuck like a human pretzel with part of me in the front seat and one leg still in the backseat.  I tried to remember my yoga and shift my body slightly, but it took forever,
and, in the process, I got myself jammed up against the gear control and have a bruise on my back.  I would hate to have to explain it to somebody in an ER.

In the meantime, poor Moxie does not have a clue about what I'm doing, and she is starting to panic and whine. She's trying to climb over both the console and me to get   where I am.  She finally made it over. She then felt if she licked my face long enough, I would be sitting up again like a normal person and by golly it worked.

Oh dear! I'm trying not to laugh, but the vision in my head of you as a pretzel is quite something! I do hope that your back isn't horribly sore from the bruise, and that the next test of Moxie's talents is less trying -- for both of you!

When we had a dog, I tried to take her with me on short errands so she would not associate car = veterinarian. It worked, she never had a clue until we got there.

I'm sorry, I confess I did giggle a bit reading this. I hope the aches and pains go away soon. Thanks for a much needed laugh this morning.

Oh, no! Honestly the things we get into for our critters......

So happy to read your Posts. You delight me with your contents. The car incident left me smiling as I could see myself doing the same thing. Happy you have Moxie! (dog and ability to get out of situations).

Hahahaha! This is so cute and I can imagine the way you felt. I hope to meet Moxie sometime! Teresa