You probably don't remember how  I lamented last fall that I missed my usual source for amaryllis bulbs for holiday blooms.  Then it turned out I was able to find bulbs early  Dec. at a Walmart closeout and they bloomed when I came home from heart surgery in late January. Too late for the holidays but I enjoyed them immensely into February during my recovery.

Every year I try  to get them to go dormant with no success.  But this year I watered the foliage until it wilted of its own accord and seemed dormant.  I figured if I started watering them in October I would have blooms for the holidays.. 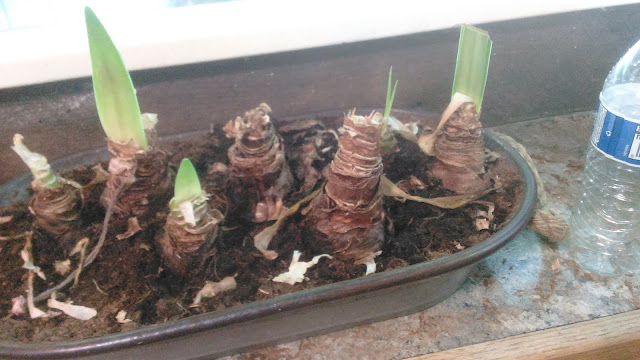 Then mid July with no water and no encouragement  the darn things  just started growing and I'm distressed as it is way too early for holiday blooms but what do I know. 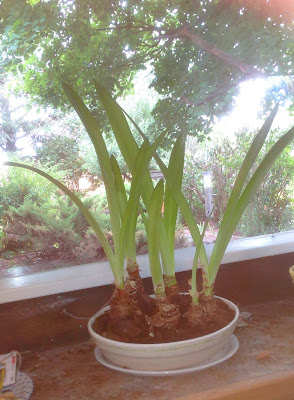 And when we got home from Norway they were looking terrific and if all goes well I will have amaryllis for a holiday but it will be Halloween instead of Christmas.

So now if I buy more bulbs at the usual time I can still have them for December.  And if I get more at closeouts in early December I will have blooms again for February and if I get the ones growing now to go dormant again I can have blooms for March and if I continue I will have blooms every month and pots of dormant bulbs under every bed and in every window. 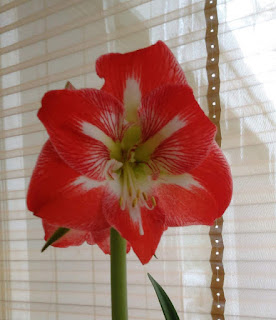 Now that I know the secret to get them to go dormant I will try again and again.

Things are looking up for selling the farm and may be doing it earlier than I thought... Again my careful planning may be all for naught. 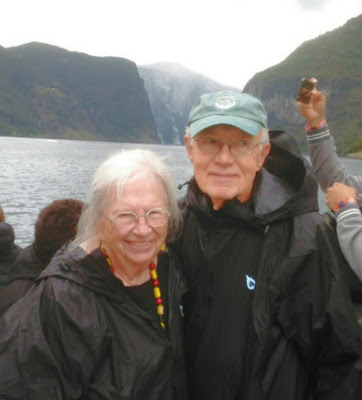 It has been a good while since I posted and it was for a good reason... we took a travel package to Norway.  We have always traveled on our own and never with a group but I have to admit that a group tour was the best way to see Norway.  We traveled by bus, ferry, cruise boat, and train and it was all spectacular.  We were especially lucky we were told because except for one day and one evening, we had beautiful sunny weather and I seldom needed more than a light cotton sweater.  But on this particular day it was indeed raining and I am soaked but we were on a ferry and I was determined to be out on the bow of the boat to see everything. 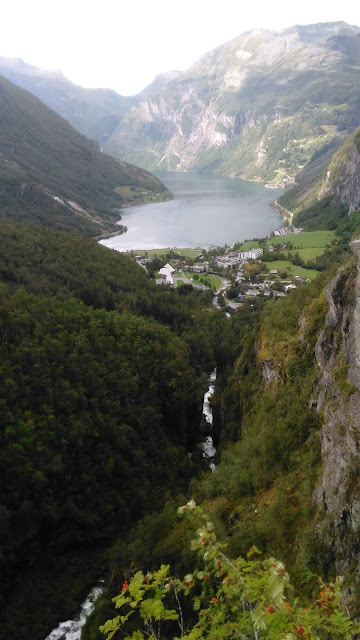 This photo is of a tiny town where we took a cruise boat up this fiord and I took this shot as we leaving and climbing a mountain on a narrow road with one hairpin turn after another in a very large bus.  Most of the time I tried not to look down as the only guard rails were a row of stones....and not very big ones.
I know if sounds grandiose to say the scenery was breathtaking but honestly it was just that.  I especially loved traveling through all the farm country and smaller towns.  Ninety percent of the houses in towns and villages were white and all looked freshly painted.  Our guide told us that in early days white paint was the most expensive to buy and so to have a white house gave the appearance of being prosperous... True???

But there were many mustard-yellow houses that I loved and it was considered a royal color.  The remaining  houses were shades of grays and red/brown. Only saw one green house in all the miles we traveled. Having a yellow house with lots of gingerbread trim is now on my bucket list. 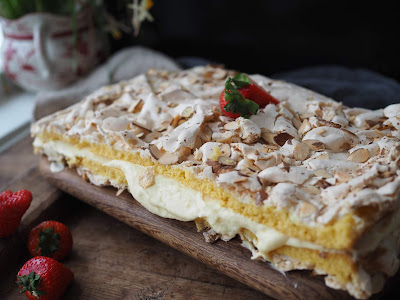 We ate lots and lots of cod and salmon and the bread and cheese were to die for.  At the wonderful fish market in Bergen DH ate a sea urchin....a first for him.  I settled for tiger prawns.  The dessert I liked best was Kvæfjordkake....a classic Norwegian dessert  similar to English trifle and Italian tiramisu  in that it was constructed in layers but one of the layers was a meringue.  I found the recipe and will definitely make it.  A café was opened on the island of Hinnøya in the town of Harstad  in the 1920s by Hulda Ottestad and her sister who were from the neighboring area of  Kvæfjord.  She is given credit for making the cake a famous Norwegian classic.

With only a glitch of a strike in Amsterdam airport that fouled our reservations and some lost luggage it was a grand time and I managed to climb on and off the buses and boats countless times and wander cobbled streets without falling once... but so good to be home again.