Letting my hair down ---literally! 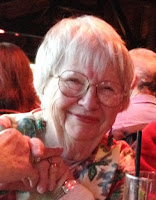 In the summer of  2018 I posted a blog about my  hair. But actually it was more than the hair.... I was mostly discouraged with the rising cost of the   taxes, insurance, and  maintenance on the farm.  Inflation was eroding our savings and pension.  I wanted to sell the farm and move but DH was  absolutely dead set against it.  He felt leaving our home of 40 years was equivalent going into assisted living. He was about to turn 85 and most all of our dear friends had passed.  Selling everything and moving was  scary at best.
I was always exhausted and just overwhelmed with what needed to be done. I was watching the farm was deteriorated all around me.  At the very bottom of my list of anxieties was my hair.. DH liked it short and I hated it.  It looked nice for a couple days after it was cut but quickly turned to shaggy dog ,,,,, and I resented the cost of cutting it, which also kept increasing.

Frustrated I just had to do something,,, just anything.... to feel I had control of something in my life and the easiest thing to take a stand on was my hair....and I did,  For months during the awkward stage of growing out DH kept offering  to take me to the hair dresser but I stood my ground.  He eventually gave in. Meanwhile I began a relentless campaign to convince him to move and at first it seemed hopeless.  I contacted a realtor and  began searching for houses by myself  and he eventually gave came around,   Then  I had open heart surgery which has made a radical difference in my energy level. 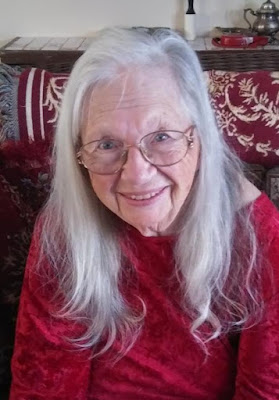 Now two years later between the sale of the farm and the lower cost of maintenance on the new house our budget is much happier.  Thanks to the new bypasses in my heart I have much more energy to work in my new garden ..  DH is so happy with the new house that our marriage is once again harmonious...  in short life is good but he still prefers my hair short.  I am standing firm on that issue and it continues to grow and like Samson I gather strength from it. 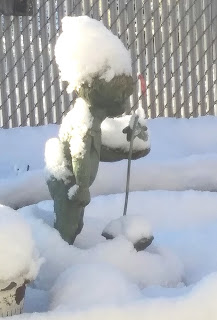 We had our first snow of the season and I am   ready for it... The only outside task unfinished is the stained glass on the veranda and as soon as I finish the leading it will be a quick fix to set it in place....the first warmish day We did the big move in March and as soon as the weather turned nice in April I abandoned all necessary work in the house to submerse myself in transforming my new garden.  And  now as I suspected all the inside work is still there waiting for me and I'm glad. 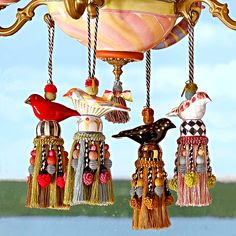 Since I can't stitch I have been trying to imagine what I am going to do for fun this winter.  One can only spend so much time unpacking and sorting.  But I do know what the first fun project will be.....doing my bird tassels for the velvet valance in the entry area.  These  are the tassels that were my inspiration.  I just  love the mixture of materials.  I sold most of my trims etc. but think I have enough for this.  It will give me impetus to unpack the stuff in my workroom.
I not only want to use thread for the tassels, I want to use silk ribbons, antiqued chains , beads and charms as well. 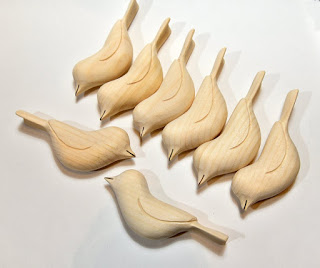 I bought these wooden birds on etsy last spring so I am all ready to go on this.  First the birds need some reshaping and I can carve and sand them to give them  individual personalities.  It is mostly the head and beak that need a little fine tuning.  They are a soft balsam wood and I may even add more wooden tail and wing feathers to give them more dimension. 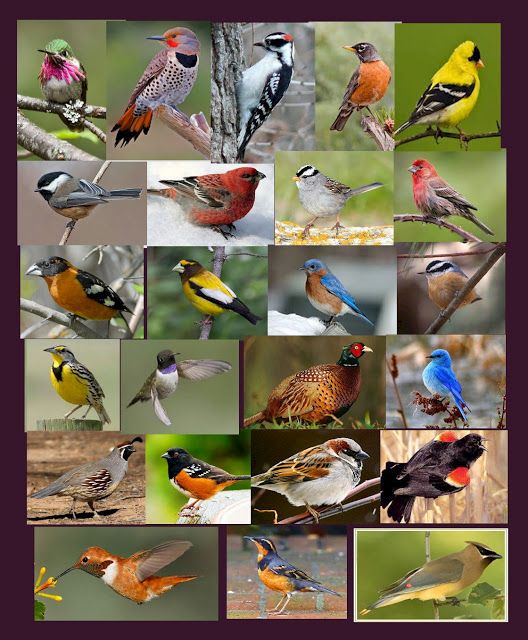 And I don't want whimsical or generic birds. I want some of my favorite birds that visited the farm... so that means I have to unpack my paints as well.  This bird composite is most of my favorite and most colorful birds.  It will not be easy narrowing it down to eight.

YES,YES, YES, and a big BUT 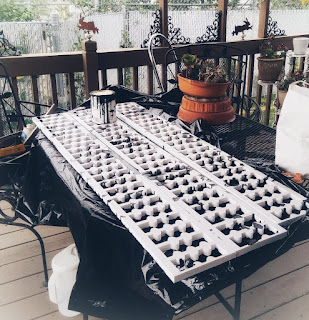 Running trim is the term used for the narrow strip running around the top of a Victorian porch.  It is available  two ways..... affordable (faux and synthetic) and outrageous (real wood spindles) and I went for the affordable.  But all sites listed it as not available until Nov.  I ordered it anyway but had just about decided to cancel the order when it showed up on my porch.

It was pretty tacky looking out of the box and very difficult to paint. 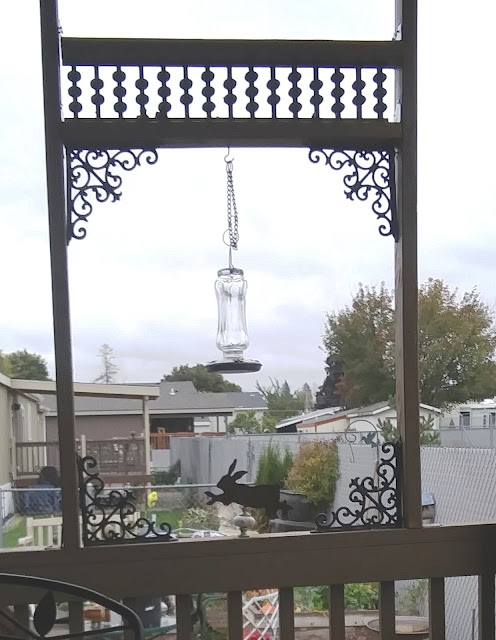 But much to my surprise I loved it when I got the first piece up. and it is just the finishing touch my project  needed.  It is slow going putting it up and took most of the day doing this one piece doing the routing on the saw as I sold my router when we moved. 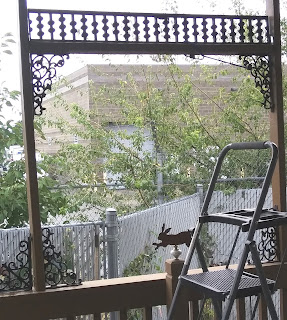 Here is a piece temporarily perched on the largest "frame " which just yesterday I was planning to disassemble and make smaller... but the running trim is bold enough to bring it together.  I had ordered three sections of the trim and one was intended for the spot the new stained glass will occupy and now I have adjusted my plan once again to use that piece of trim elsewhere...

The big BUT is that I will need another set of cast iron shelf supports.  I started out ordering a set of 4 and keep ordering just one more set and blindly refuse to add up the cost..... Luckily our deck is covered and I can work out on even cool misty days like today.

Veranda of iron and glass 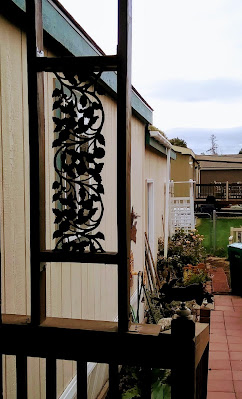 All the larger items were taken to the new house by the movers in a big truck and we moved the rest in smaller pickup loads and just when DH thought we were done I'd find another truck load from the barn or garden.  Even in the final days of the sale I was hauling used lumber and  more plants.
If it had gone on any longer I was ready to start hauling my favorite rocks.  I did take the majority of my wrought iron and stained glass I had collected over the years without the slightest notion where I was going to use it.  But I am gradually finding a place for it.  This was a piece  which hung over the stove in the kitchen at the farm and is now part of the new "veranda..." 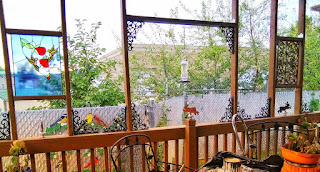 The iron piece on the right in this shot used to hang over the mantel of the fireplace in the living room... All the corner pieces are shelf supports from Amazon and I kept ordering more and more of them.  This whole project is in flux and just today I decided to needed to undo and redo sections... 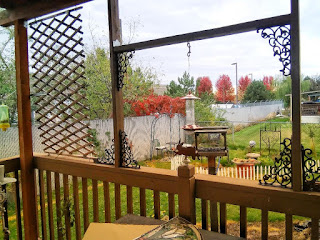 There are three large frame areas that have a fancy hummingbird feeder in each and the "frames" vary in size and somehow the ratio niggles at me and I won't be happy until I change it. This end has the two trellises hanging  and there are honeysuckle vines just barely started up them.  The trellises are actually baby gates from the thrift store.
The stained glass below will be above the "frame" on the right.  The glass just appeared recently as a gift from a friend.  This beautiful piece was damaged and she realized she would probably never use it again and was looking for a home for it.  I am ecstatic to use it somehow in this project.  I am just about done repairing it.  Luckily all my stained glass tools were in one of the last truck loads before the farm sale. 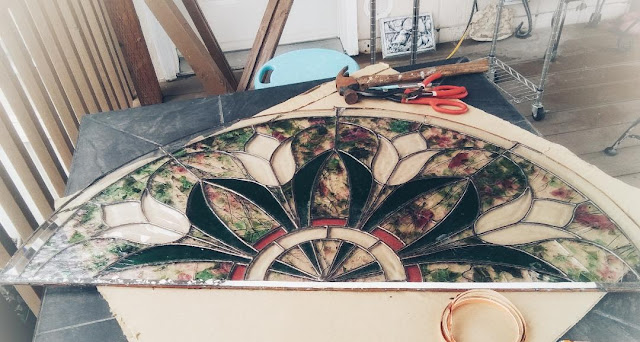 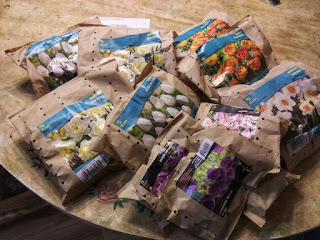 Yesterday DH took me to Walmart and my cart literally transported me into the nearly deserted garden dept and lo and behold all the bulbs were $1 a bag.  For $10 I got another 100 bulbs.

Are you still out there????

IIt has been so long since I posted I don't know where to begin.  I have been doing so much to the garden and rushing to get it ready for winter.  Most projects are unfinished for one reason or another but far enough along that I am comfortable waiting until spring to finish.   Some like the mini greenhouse can be a winter project in warm spells we sometimes get.Now that the weather has cooled I am going to give one more effort to master this new format of blog.  I can now insert a picture but unable to move it once it is inserted.  I thought it nught be the browser causing the problem but apparently not.. 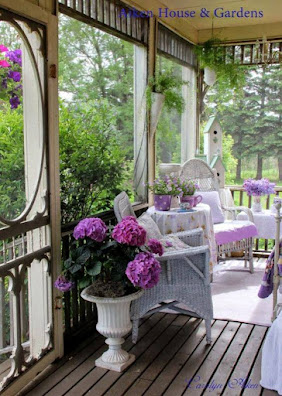 The one project that wasn't planned and has continued to evolve is the transformation of the deck.  It is so close to being finished and then I add another element.  Now the running trim has finally arrived after being backordered twice, it is almost too late to paint it and I will need help to install it.  I had wanted to create the feel of an Victorian porch and am slowly but surely getting there.  I thought I could see the end and then a friend gave me a piece of damaged stained glass that I want to repair and incorporate.  My main element are iron shelf supports from Amazon and I just kept ordering more and more of them.   This photo was taken about three weeks ago.  I will try to get a newer picture tomorrow. 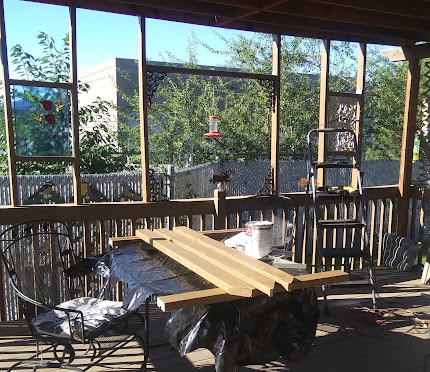 Since I last posted I fell off my ladder and broke my tail bone.  I now have a bum bum.Today I planted the last of the bulbs I ordered earlier in the summer.  I tried two new bulb companies.  One was John Scheepers and the bulbs were fantastic and I couldn't be more pleased and the other company was Brent and Becky and I couldn't be less pleased.  I t was supposed to be a collection of 100 white spring bulbs including tulips and daffodils.  There were only about 12 bulbs that could be tulips or daffodils and small at that.  The remainder were tiny somethings (about 3/4" and certainly nowhere near 100.
Posted by Gerry Krueger 7 comments: