Odds and ends about what's next... 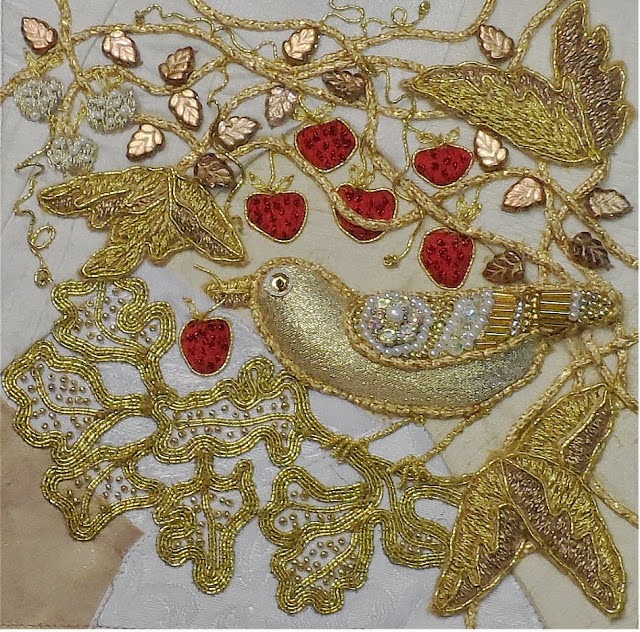 I spend so much time stitching while sitting with mother that I have not only finished March and April CQJP 2015 and I have started on May and June..  But I  could use a break from corsets but have absolutely nothing suitable for toting about.  And finally after giving it some thought and decided on two new projects... First is really expanding and exploring an old project... Faux Goldwork

I initiated two Fool's Gold round robins several years ago and thoroughly enjoyed experimenting with ticky-tacky gold stuff to create a goldwork look but the RR left me with the feeling I wanted to try more...... I could have happily kept every piece I did, especially this fat little bird with strawberries.  This was mostly couching and very slow going. 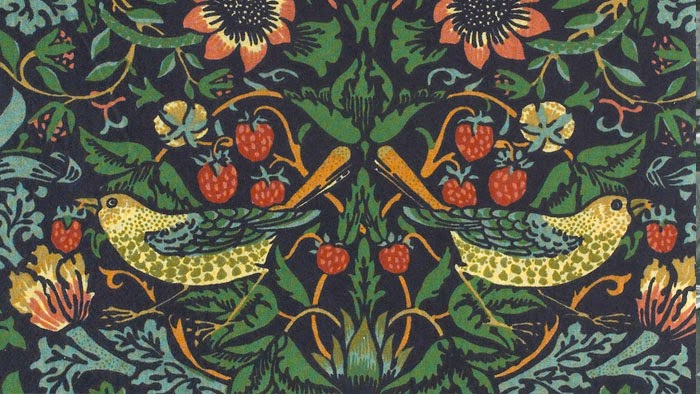 It was inspired by this piece of William Morris wallpaper.  So I must find time to make up about ten 7" blocks and take a sketchbook with me to mother instead of stitching and work up some ideas from other Wm Morris artwork. I love his combination of   art nouveau  flora and fauna. I had so much gold stash left that supplies will not be a problem...and I would like to use this stash before I die....  This finished piece will be a shroud.

I also removed the original paisley on this block as well as the January one and added a much smaller paisley.  Using the 15 beads and the tiny sequins that Shirlee sent has been a tremendous help.  There are two seams with folded ribbon. 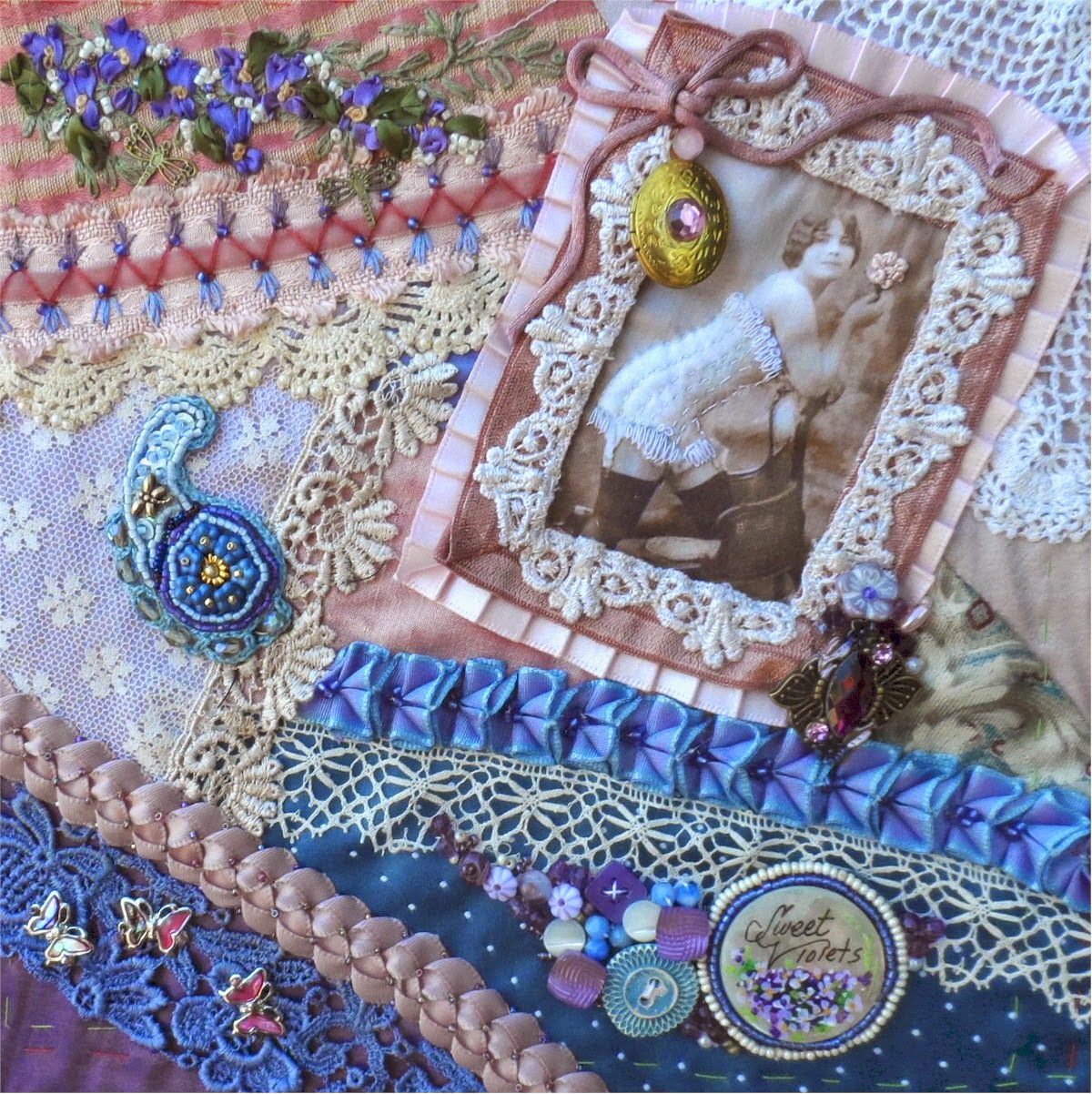 I'm hoping Susie W. is reading this post because this is one of the folded ribbons she did when I was visiting in January and I just love it...  It is actually two ribbons folded together at the same time to get the two-color effect.One ribbon is some of the seam binding  we dyed pink.  Once I applied it to a seam and embellished it, it is even more spectacular... 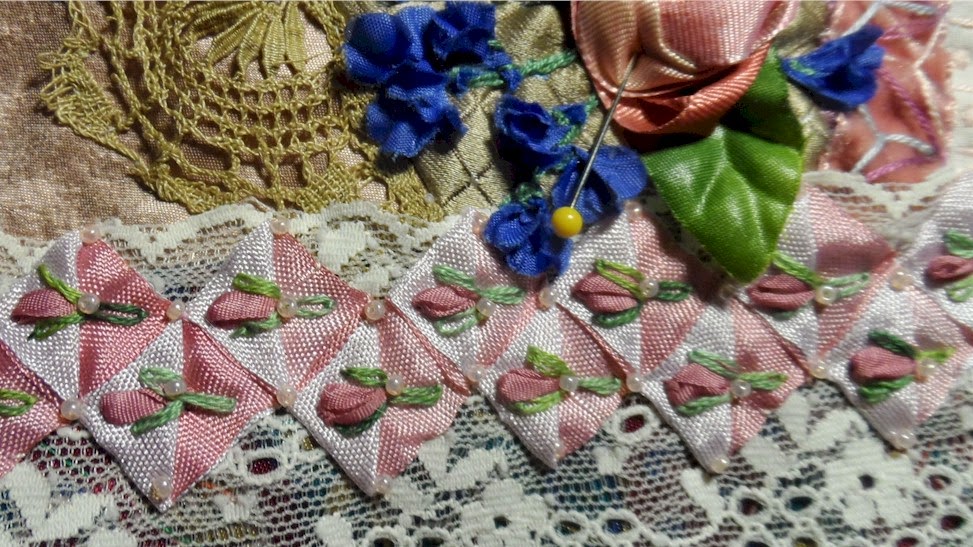 Last week I received another batch of folded ribbons from her...  Aren't I lucky that she likes doing these when she is settled in the evening?  Do notice the polka dot one near the bottom as I will use it as soon as possible... 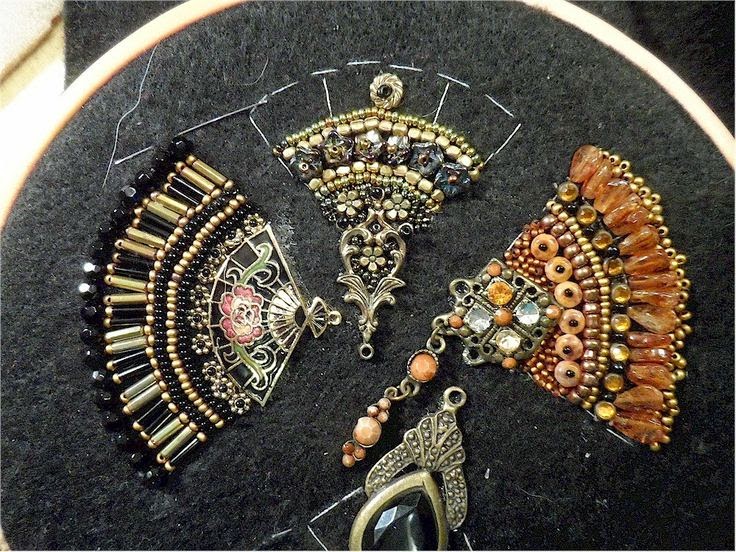 My last post was how I did the crowns.  I should have mentioned that they were exactly the same way I did the fans for the suffrage quilt... off block and on felt.  Remember these. 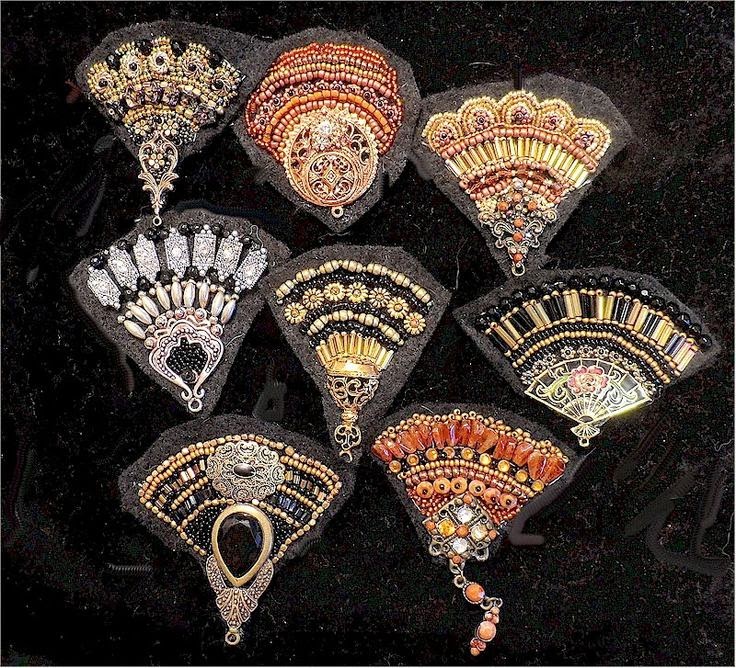 Here they are rough cut and waiting to be trimmed closely and attached to the block. I always try to do these type of projects on fabric that matches the block so the backing does not show through the beading.


Doing it on felt did not work well at all for the paisley.  So I am still doing them off block but on silk backed with fusible knit.  The 15s are working well and Shirlee Fassell sent me some teeny tiny pastel sequins which are sooooooooo perfect. 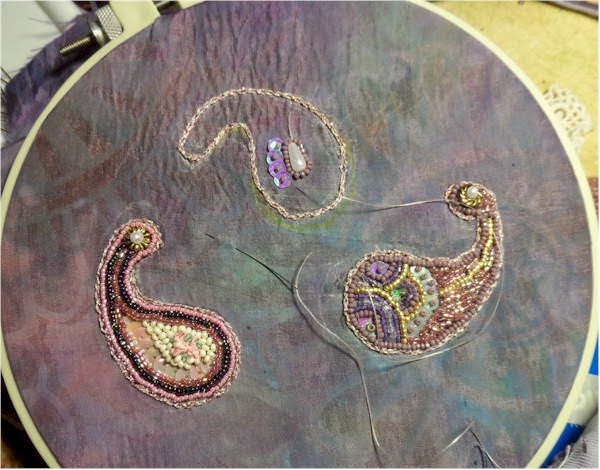 I am doing a LOT of stitching while sitting with my mother and have both March and April CQJP 2015 almost done.  I was working on a small folding table that was an awkward height.  One of the nursing aides brought me a adjustable bedside table so now I can comfortably do some beading on the paisleys as well.
Posted by Gerry Krueger 6 comments:

How I beaded the crowns 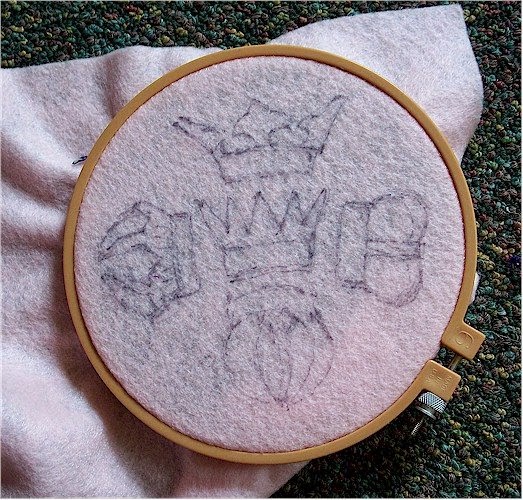 Cindy asked me to post how I did the crowns...  I did find the old post.
You can go back and read it but I did the same as I am doing the paisleys and do my birds.  I outline with a chain stitch...add beads or stitching....cut out and applique to block.

For a second look at the crowns on the block 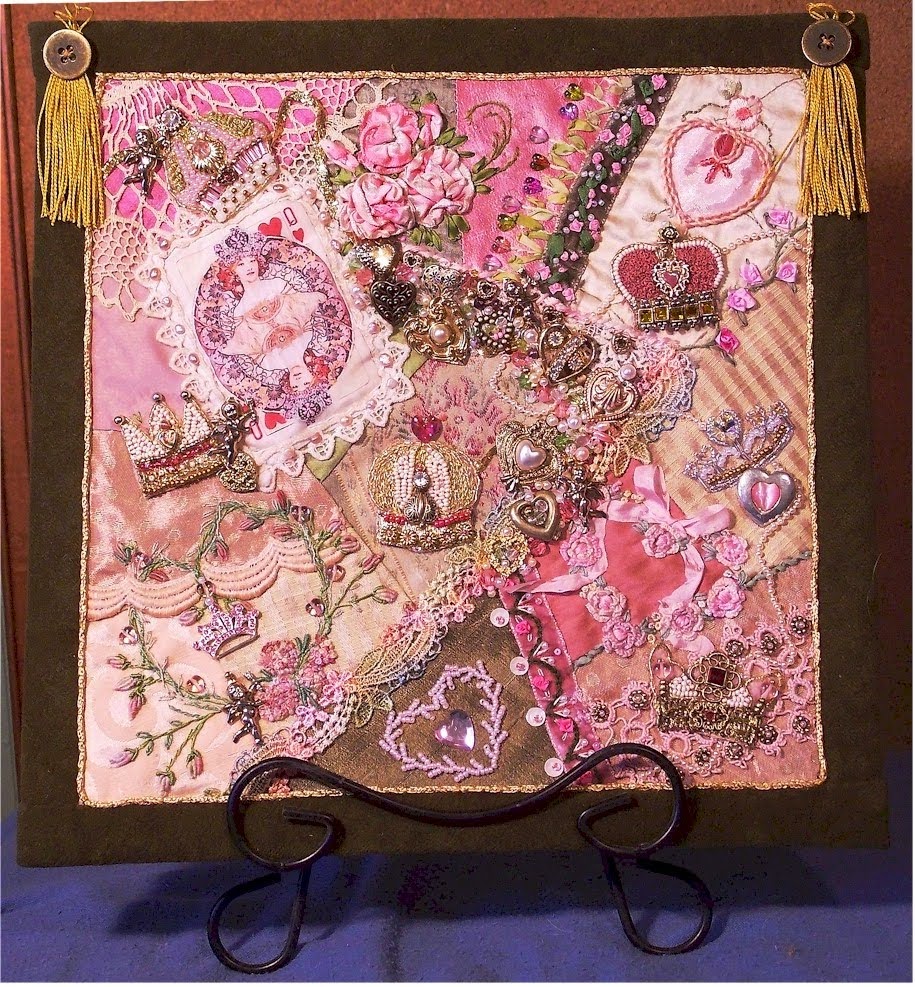 Years ago (I believe in 1999) I traveled to Australia and spoke at a International Heritage Rose Conference in Australia and made a CQ jacket to wear on the trip.  Recently Mary Corbett mentioned my buttons in her newsletter.. A lady in Australia read Mary's newsletter and remembered my name AND the CQ jacket I wore and  she took the time to write to me yesterday... I can't begin to tell her how it lifted my spirits and warmed my heart. I wore the jacket  at all garden shows at which I spoke or had a booth.  Over the years it has been hand washed several times and a little worse for wear and the images have faded... 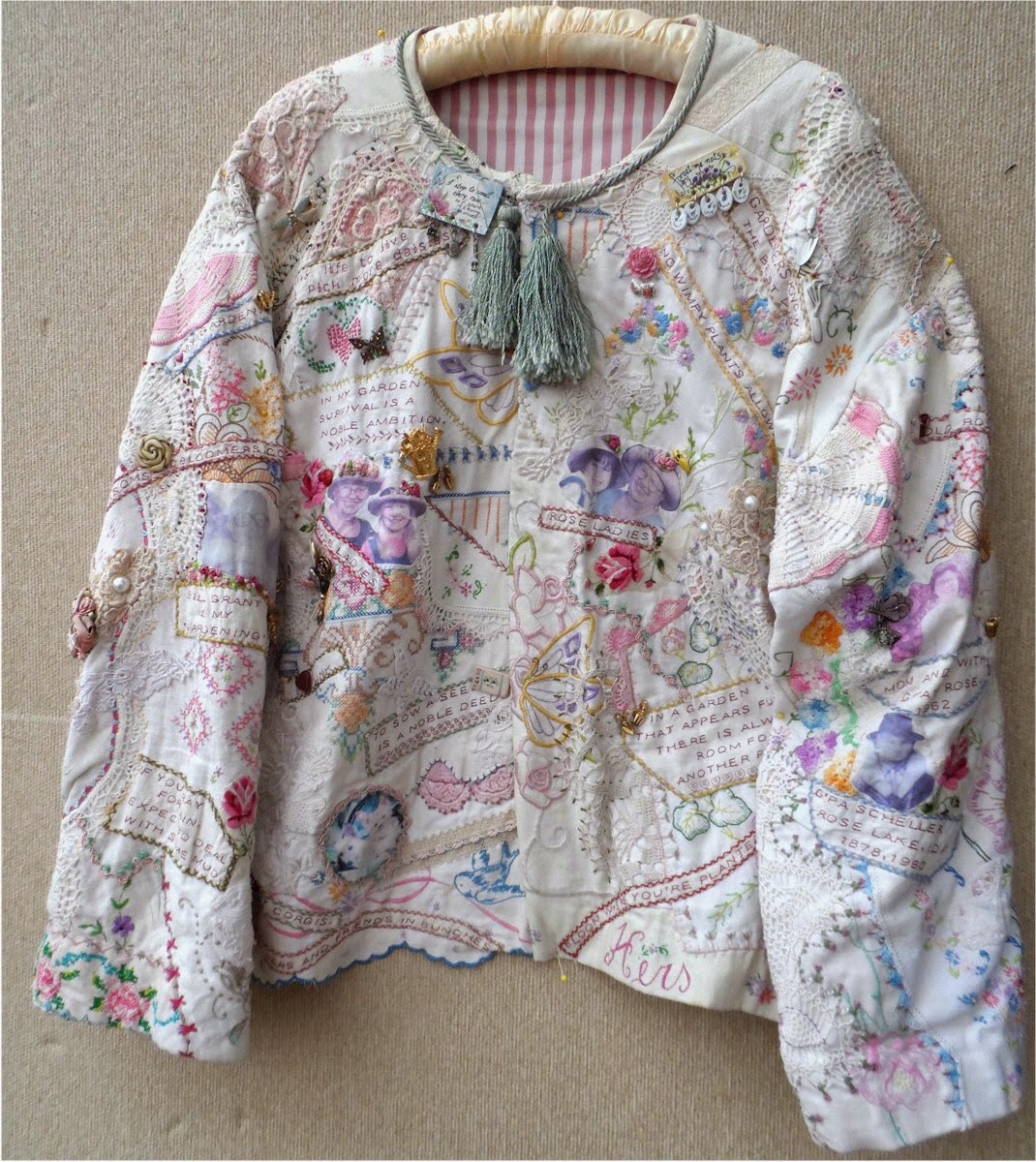 I made this in about 3 weeks and I had just gotten a new sewing machine which did lettering.. So the jacket is covered with witty garden sayings...including "I consider everything hardy until I kill it myself." 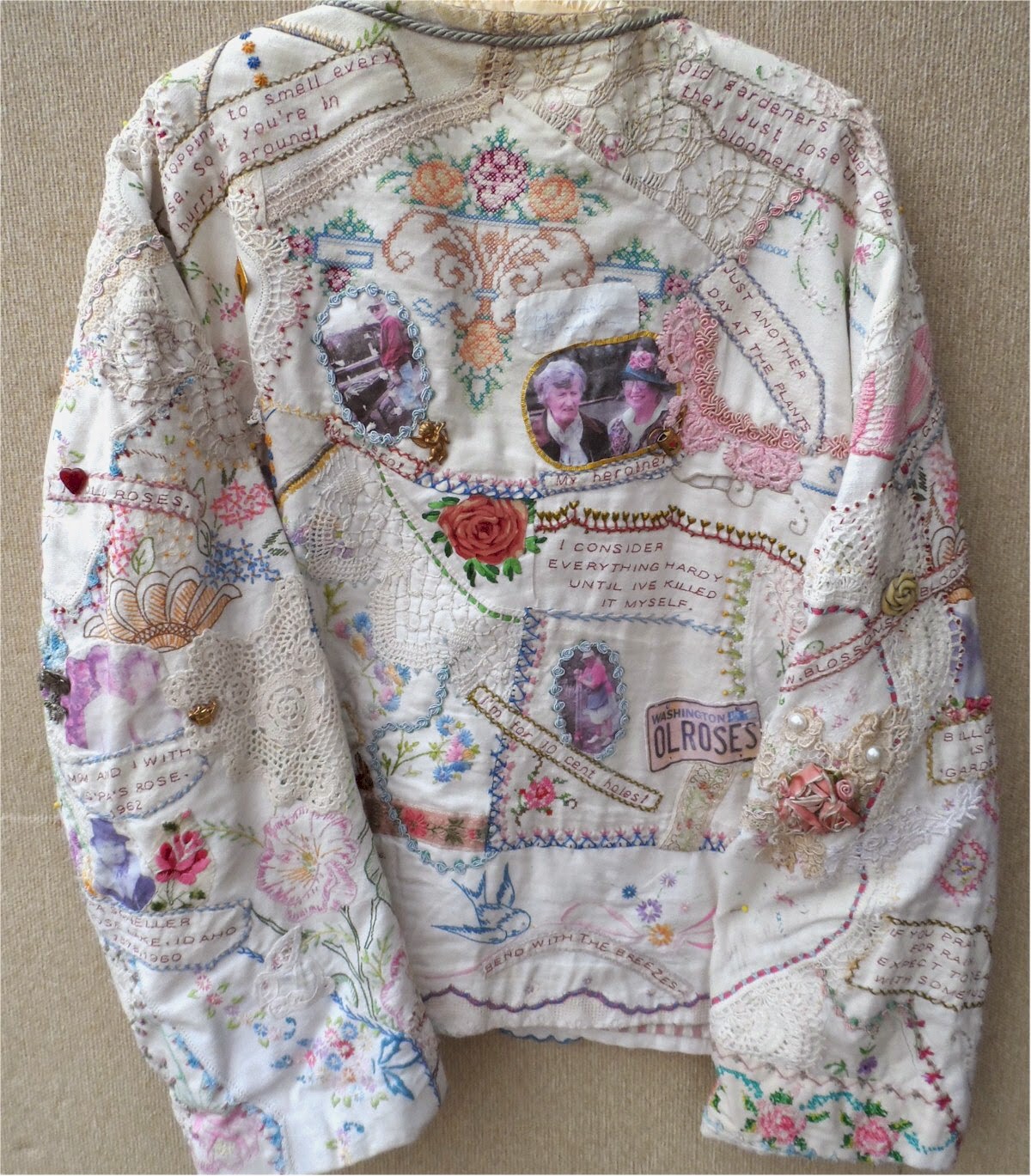 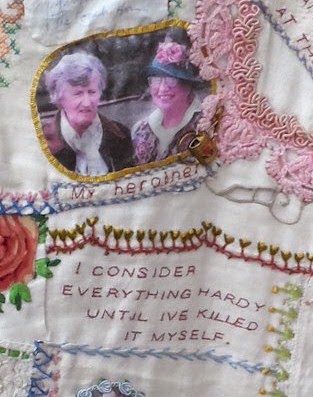 And I had to include a picture of the famous gardening maven, Penelope Hobhouse and myself when we were on the same speaking agenda in Texas. Because of the time element there was very little handwork and is entirely vintage linens.


The conference was over several days and I spoke several times.  There were dinners, luncheons and speakers from all over the world. They were the most gracious audience and, much to my relief, laughed at all my corny  jokes.  In fact I made the jacket so in case my talks bombed, the jacket would distract them.  We had a grand time...  Afterwards we celebrated our anniversary at a restaurant in Melbourne recommended by someone at the conference. The waiter brought us a lovely bottle of wine to our table as a gift from friends at the conference.  My husband order kangaroo steak.  We talk about this trip often.   Many wonderful memories. 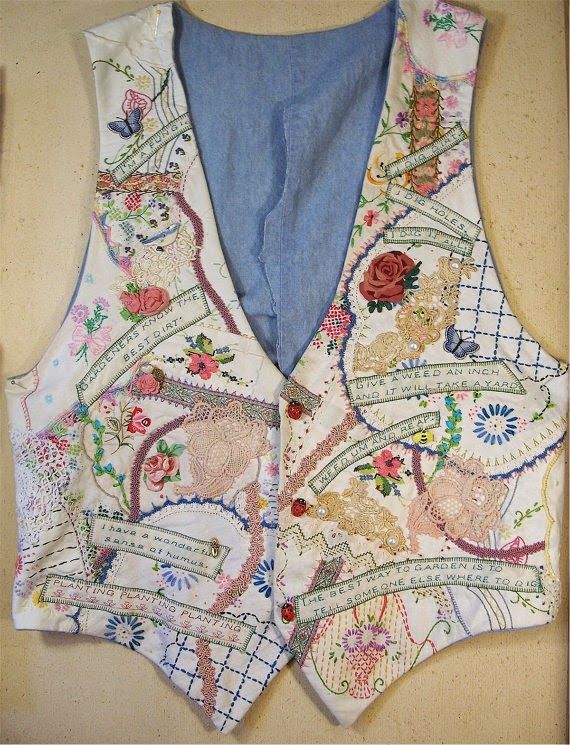 Some years ago I gathered together tips and techniques for assembling vintage linens into a CQ project and I listed it again on my Etsy site.  This is a vest I made for my husband to wear when working in the booth.  The sayings are all "guy-related"  including "I am a fungi"


As a foot note:  I knew I was going to be speaking in NZ two years hence and I asked an Aussie if she thought they would laugh at my jokes  (my presentations depended heavily on laughter at the appropriate moments)  and after some thought, she had some reservations as she thought the New Zealanders were a sober lot.  But she was wrong....they were wonderful.

Round Robin  block from about 2009 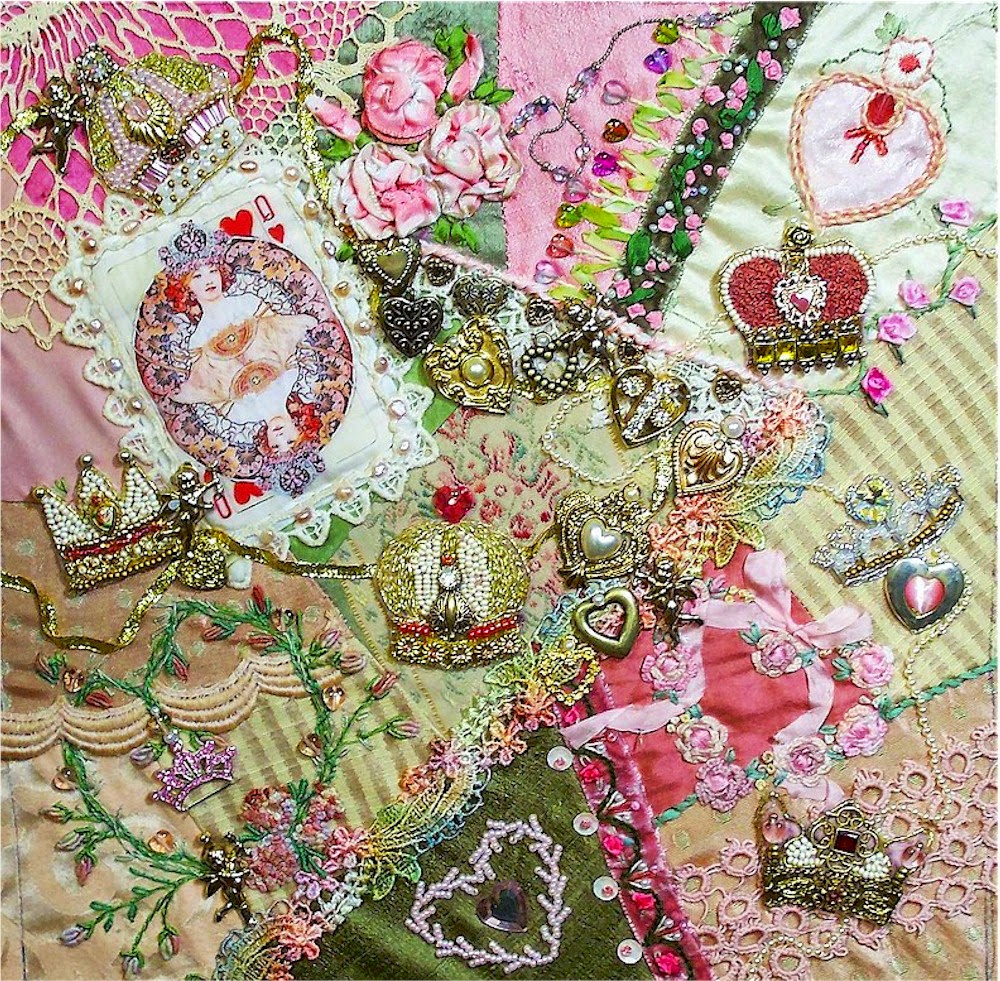 A Bunch of Bunnies and Sweet Chicks Too!

I've added some bunnies and chicks for spring... 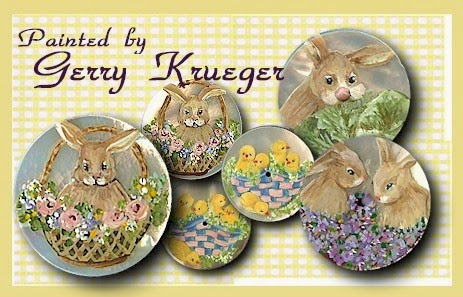 Mother Update: I want to thank everyone who has sent emails of concern and prayers. My mother is dying a very slow and painful death.  I didn't think she would make it through last weekend but she has rallied slightly and is tenaciously clinging to life and every minute is a struggle.  I continue my vigil and so grateful for the hospice helpers.  Most everything in my life is on hold and I make no commitments and go day by day..﻿
Posted by Gerry Krueger 8 comments:

Functional AND beautiful - I love it..... 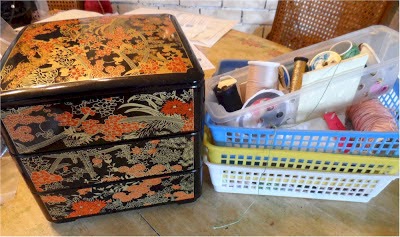 In February of 2013 I wrote about the  Asian stacking boxes I found at a thrift store.  Up until then I was keeping stuff gathered for a project in plastic  baskets I could stack to move around or clean up......functional but not beautiful.
Now I treasure them and they are a permanent part of my stitching supplies.


It was immediate love when I started using it for the ongoing suffrage project.  I had so many bits and bobs and it was a dream to be able to clear the table when needed and still have a lovely aide. 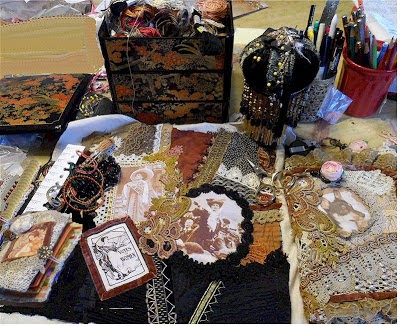 Eventually I got a second one on eBay and am using both for this CQJP project and the hanky quilt which use many of the same materials.. 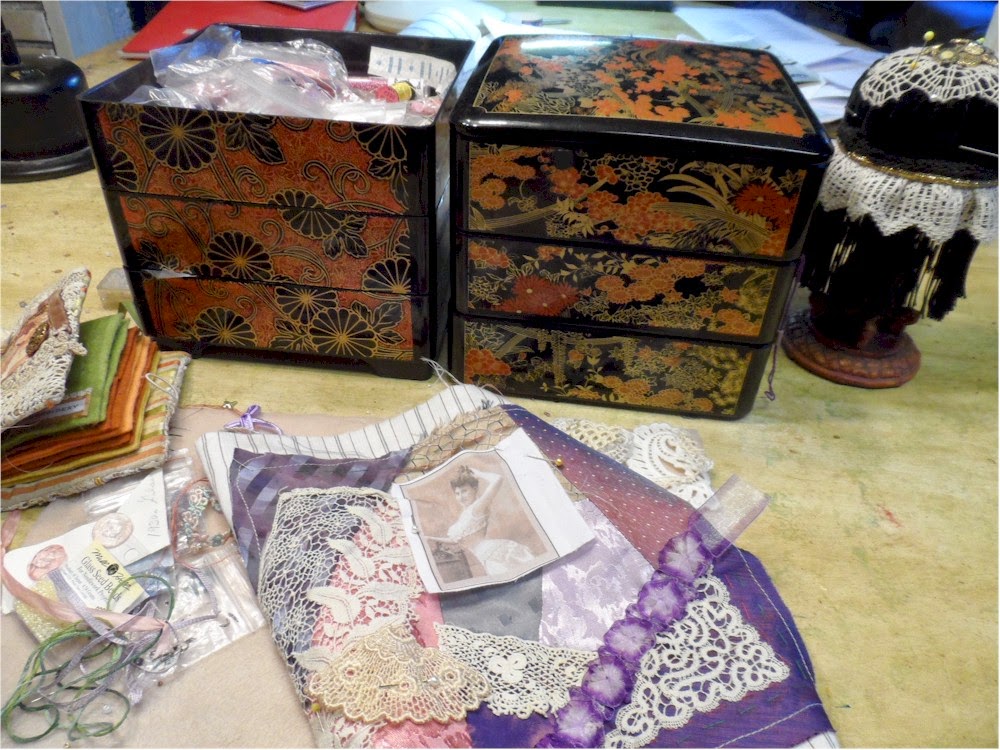 It is such a delight to set all my supplies out when working and be able to stack them away. 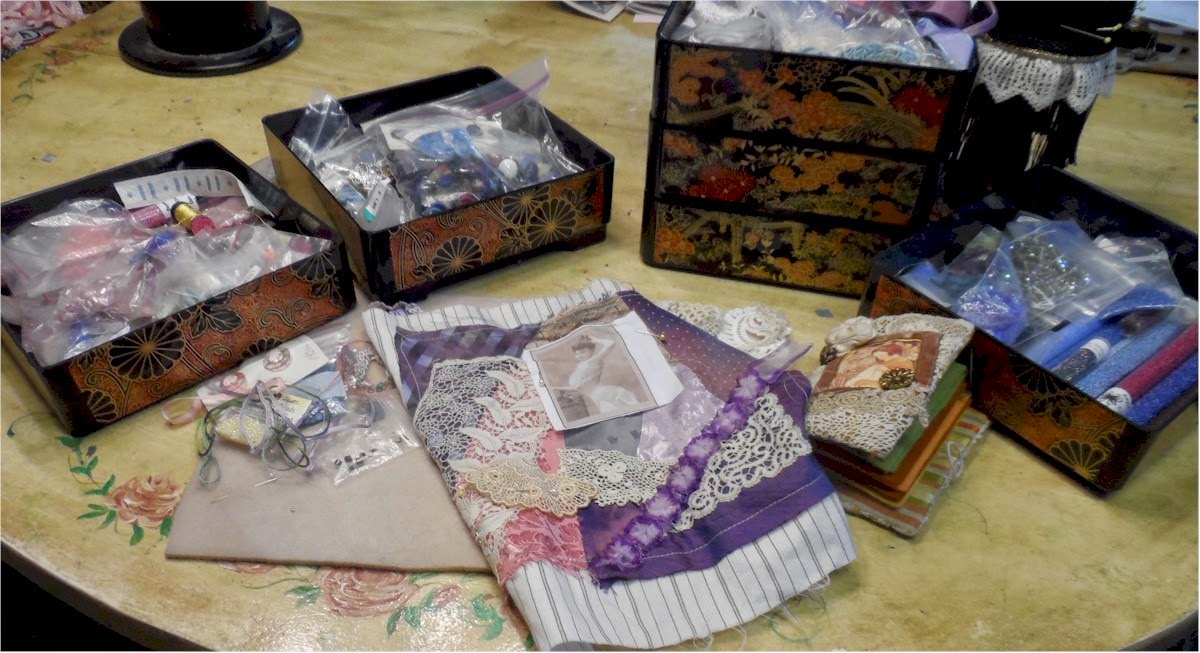 I am about to start another project in an entirely different color scheme and wanted another set of boxes so went on line last night and found a used set for $10.  They are available new at the Happy Mall ...  but I find them used on Esty and eBay for very little.  I use "Asian stacking boxes" when doing a search but they are sometimes called Bento boxes or also wedding boxes.  They would be a great mother's day gift for yourself or as a gift to another stitcher.
Mine are lovely but just plastic. So if I were wealthy I would definitely go for a antique one like this....only $2200. 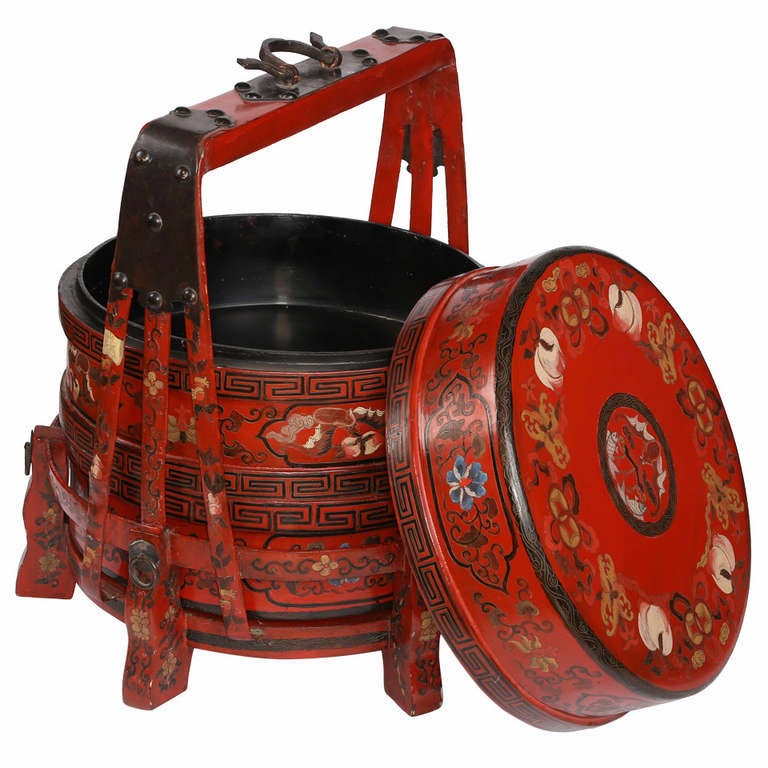 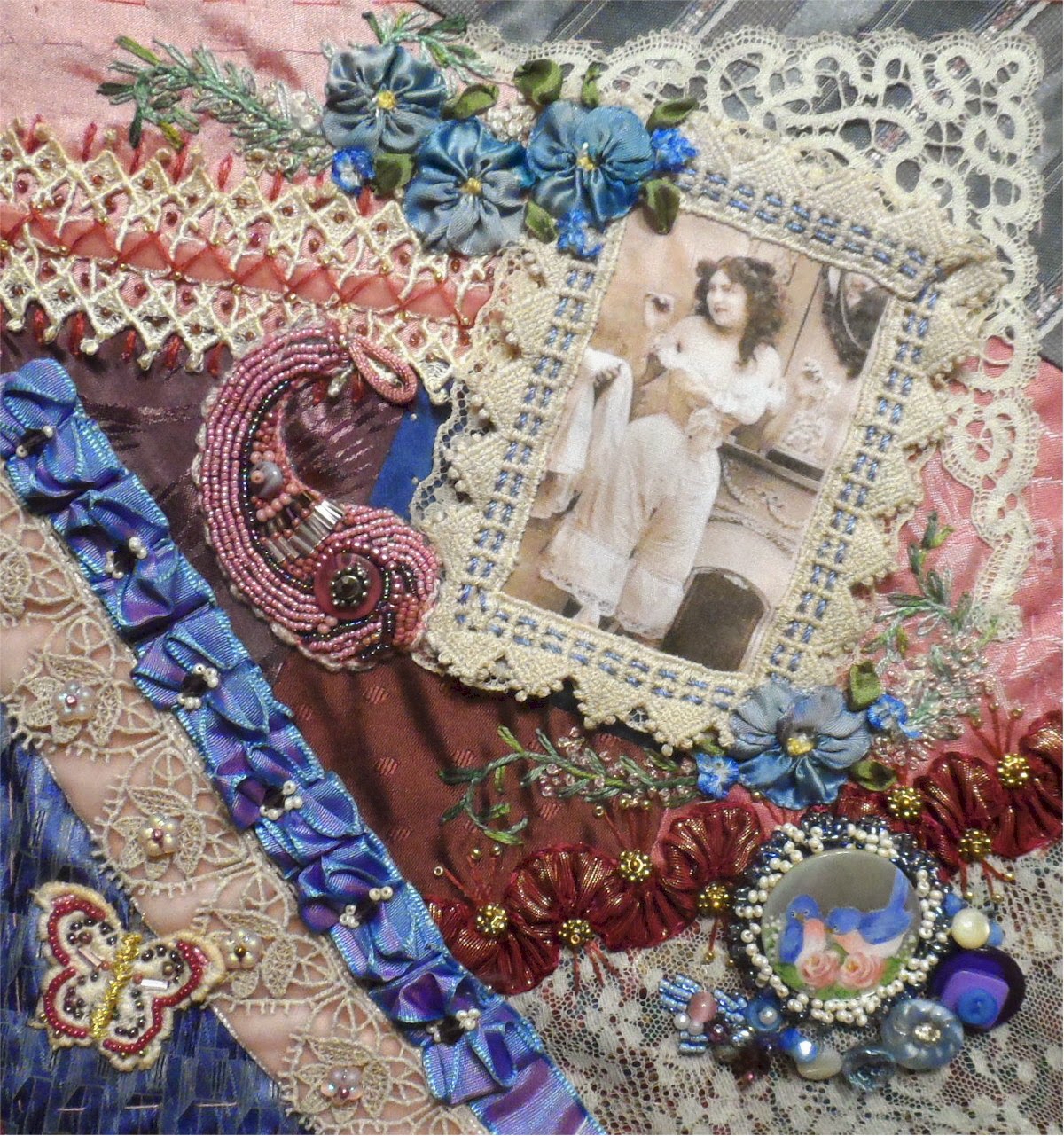 I took off the old paisley and redid it... It is basically the same design only this time:

I also added some more buttons and bling here and there.  Shirlee Fassell sent me some fantastic sequins and I will start adding them to paisleys and elsewhere.  Here is the before and after. 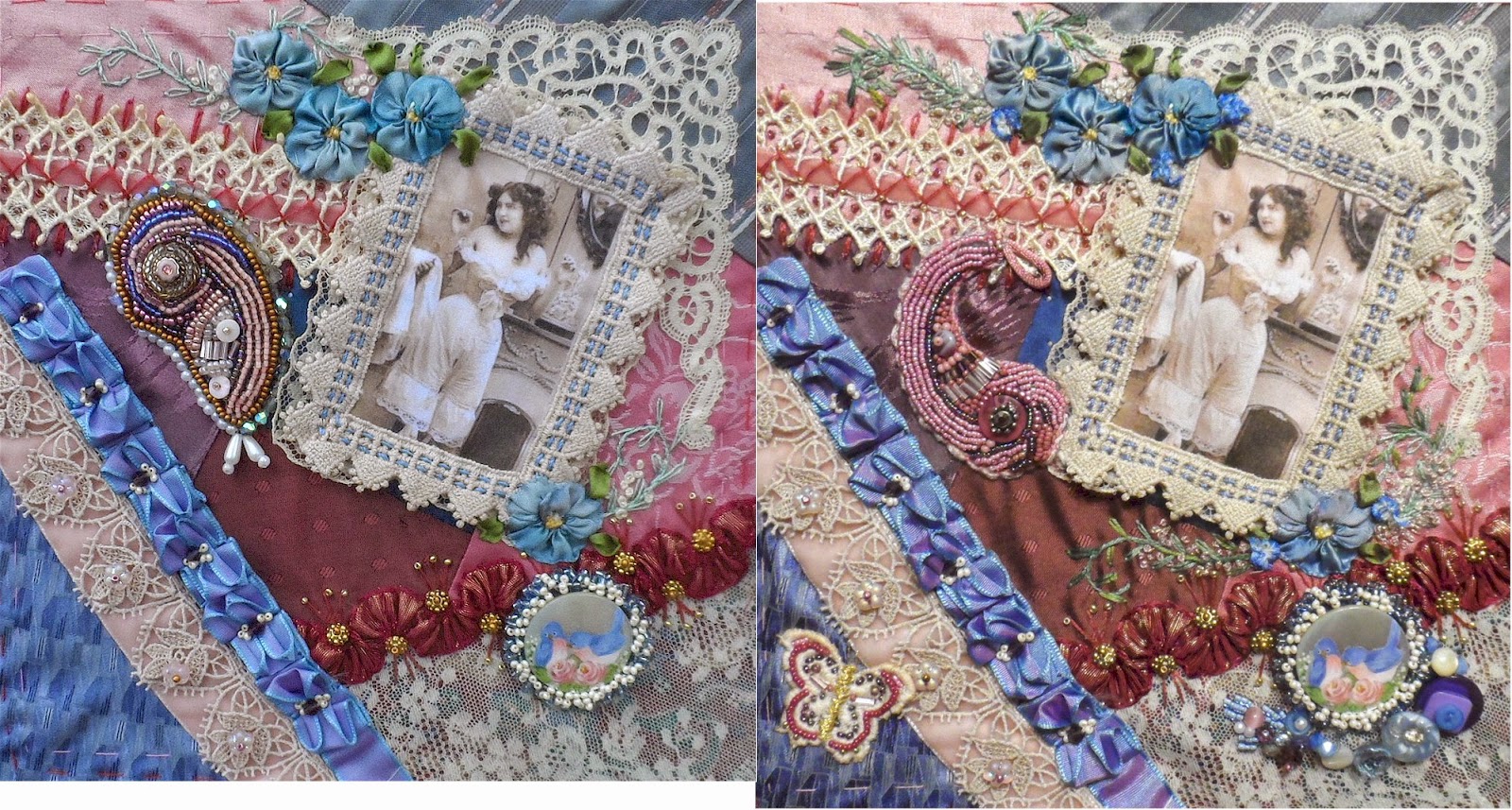 We are adding more help with mother's care so I am mostly sitting near her to fetch liquids, etc.  As I was getting ready to leave today she beckons me close and said...  "Your hair is messy!"
Posted by Gerry Krueger 11 comments: