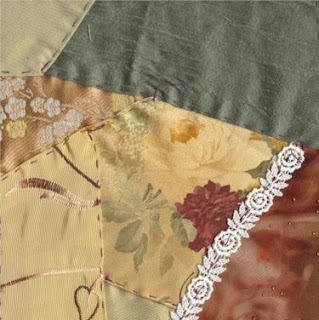 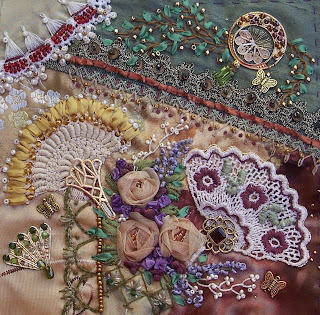 My work on Cobi's fan block #4. I'm sad that this RR has ended. It has been by far the most enjoyable for me. All the blocks have been just sumptuous and all the work by others before me was splendid. Just the variety of ingenuity of the fans in this DYB RR would be worthy to add to a scrapbook... Personally I prefer to "construct" fans from bits of lace, ribbon, findings etc.
Posted by Gerry Krueger 2 comments:

A stranger called the other day and had a friend visiting from California who had small flock and could he bring her over to see my red-headed sheep that he had heard about. She was about my age (a little older), about my size (well much thinner) and I have 10 sheep I raise for milking and she had 12 sheep that she raises for wool as she is a spinner.

Well we hit it right off and if she lived closer we would probably be very good friends. We talked sheep and were having the best visit when she noticed my left hand. We BOTH had cut off the pointer finger on our left hand just below the first knuckle. I have never met another woman who had cut off a finger, let alone the SAME one I had cut off... That cinched it...we are practically twins. And how did you cut off your finger you ask?... read on.....
Posted by Gerry Krueger No comments:

or "A Real Gardener is Willing to Sacrifice a Body Part!" My garden is filled with benches, arbors, and trellises. The comment I hear most often is, "How lucky you are to have such husband who can build these things." I immediately bristle. I'm the one with the missing finger, so doesn't it automatically follow that I'm the carpenter?

Upon hearing I cut off my finger with a trim saw, men roll their eyes, implying a women shouldn't be allowed to touch a power tool. But whenever I was in the waiting room of my hand surgeon, the occupants were wall-to-wall men who were careless with power tools. I actually felt I was standing tall for women everywhere by proving a woman can be just as stupid and careless with a power tool as a man.

My father was the ultimate handy person who could build or fix anything. Being an only child and a girl to boot, I was lucky my father chose to bring me up with a hammer in one hand and an issue of Popular Mechanic in the other. I can still hear him saying, "Always use a tool as it was meant to be used and never hurry." Of course I'm perpetually in a hurry and, as often as not, on the top of a ladder with a power cord wrapped around my neck, holding two boards in one hand and some sort of power tool in the other.

In fact I'm always an accident waiting to happen. I've been to the emergency room so many times that my husband walks in the door saying. I didn't do anything to her." It's his automatic response to being told that emergency staffs notify authorities of possible abuse if one person has too many "accidents."

One particularly nice day I was building a small gazebo (in a hurry as usual). I grabbed a newly purchased trim saw and pressed the power button. Only then did I discover that the blade was just the reverse of my other skill saws and my index finger from my left hand was on the ground.

Being home alone, I wrapped a tourniquet around my arm and a hasty bandage around my hand. Before I drove myself to the hospital, I remembered the finger and gathered it up so it could be reattached. Unfortunately it was unreattachable and, to literally add insult to injury, I was billed $70 for "tissue disposal." If I had known that, I would have kept the severed digit and given it a proper burial next to the gazebo. In place of a head stone, I'd placed a finger stone with the inscription "A real gardener is willing to sacrifice a body part for the beauty of the garden."

But this experience did make me a celebrity of sorts. The following winter I attended Grandparent's Day at my granddaughter's kindergarten class and, after proudly introducing me to her class, she announced that they could line up and touch her grandma's "cutted off" finger. And they did.
Posted by Gerry Krueger 6 comments:

At first I thought this soft little thing I found at a thrift store was a little purse, But after some more thought I realized it was a travel jewelry case. It folded into thirds (about 3x6") and inside had 1 open pocket, 2 zippered pockets, and a stuffed "tube" down the center..obviously for rings. The tube had a precious frog closure at the end of it. 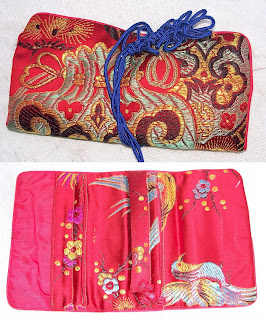 I folded it in half (5x6") and cut it down the back to insert two pieces of cardboard to make the sides firm. I glued gimp along the spine to hide the slit. 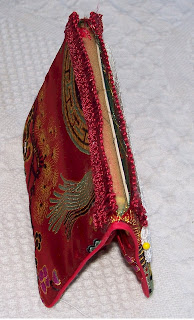 Then I proceeded to embellish with lace and beads. I attached the tube thingy to the front cover to use as a pin cushion and made a tassel fob for my scissors. I used the precious little "frog closure" to hold the tassel cord in place. Then I added 3 layers of felt to hold needles. I still had the 3 pockets (two with zippers) for thread, bits of ribbon etc. Presto...from jewelry case to needle case in one evening. Enlarge photo to see what a clever needle case this makes..... 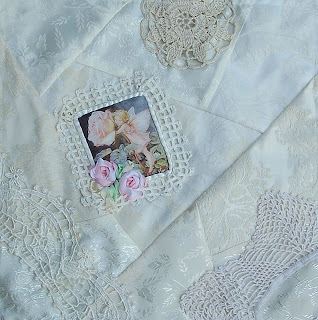 July 6, 2008
Semi-naked block off to Jo in NZ. I can't bear to send something off without lace. I adore lace. I'm delighted that Jo has first crack at it...
Posted by Gerry Krueger 1 comment:

A friend in hiding! 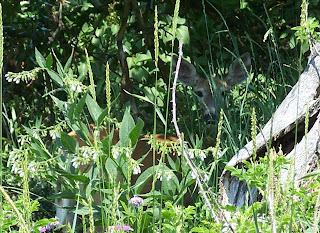 She's about thirty feet from the house escaping the heat and munching on gooseberries. The 200 acre farm next to us has been bought by developers and will soon be houses. I know the first thing the new residents will do is complain about the deer when they built on wheat fields that deer have grazed for 100 years. Wouldn't this make a great jigsaw puzzle?
Posted by Gerry Krueger 3 comments: