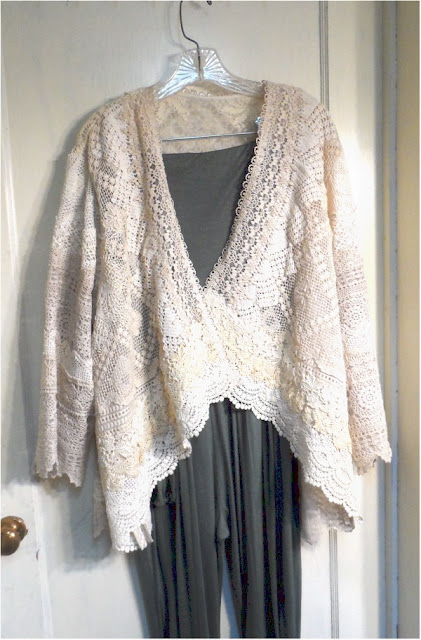 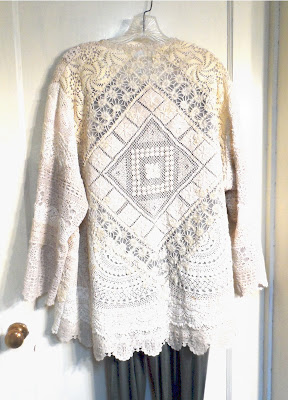 Another BIG finish is my lace jacket.  I had started this to take on our cruise last year but had a melt down working white on white.  I had all the lace work done and it just had to be assembled.

I had started this also to use up some of my lace stash but it didn't even make a dent.  When my daughter-in-law was here, she drove me all over town looking for something to wear under it.  I had my heart on something   leaf green  with a tapered leg  and we found absolutely nothing. 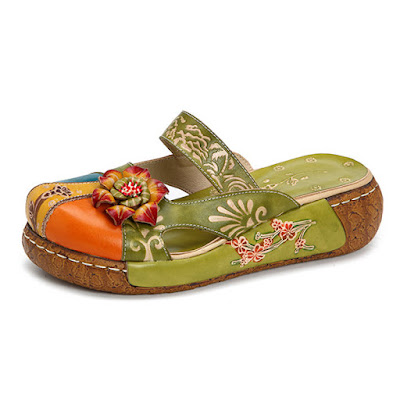 When visiting Susie in California I found a knit jump suit on the first rack in the first store we shopped in.  It has gathers at the ankles to show off these funky shoes I found on the internet.  Not only are the shoes gorgeous they are cork soled  and are super comfortable. 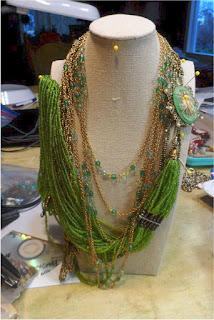 The final thing to finish is jewelry and I still haven't done anything with all these green components but that is next on the list. 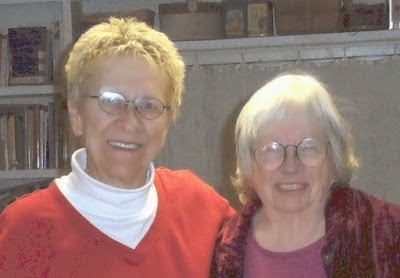 .  We met on the CQI site years ago  and became fast friends.  I have been to visit her 3 times and she had come here 3 times, we went on several retreats together and she went with me and the suffrage quilt to Houston.... 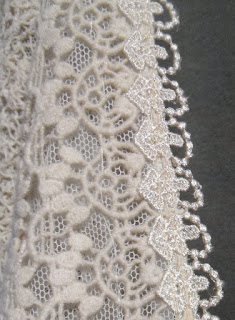 Although she doesn't crazy quilt any more she still has all her stash.  I had taken some laces that might work for the front edge but Susie found a better one in her stash...(see you never should get rid of any stash...)   So the next pictures you see of this jacket will be at the wedding March 5 in Mexico and I'll be in it. It has now become my official  attire for weddings of grandchildren.  Maybe I will also wear it for my upcoming 80th birthday...
Posted by Gerry Krueger 6 comments: 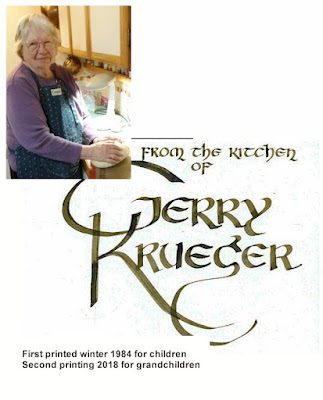 This is one of those projects you mean to do for years and years and don't.  And I wouldn't have unless my lovely daughter-in-law Vivian hadn't shown up for a wonderful visit and offered to help.  Not only with this project. but with hauling me all over town and giving my poor DH some chauffer relief. 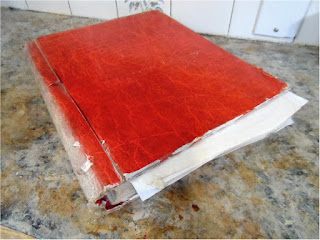 This battered and beaten old cookbook has a history.  Thirty five years ago in 1984 I was running out to our camper and fell and had a compound fracture in my right forearm and elbow.  If you aren't familiar with a compound fracture it is when you look  down and your arm is hanging funny and a bone is sticking out.....not good.  Much surgery and months in casts left me with a partially  paralyzed right arm and hand.  I was not only unable to hold a pencil or paint brush I was unable to even hold a fork or toothbrush.  I had lost all potation and rotation movement of that hand.

This couldn't have come at a worst time.  I had just gotten a degree in graphic design and had been hired to the job of dreams. The therapy to stretch the span of muscles in that hand included months and months  of doing exercises with a pen.  Since I had to do it anyway I decided to write out favorite recipes for my kids.

Starting with large letters and persisting I eventually was able to regain most of the use of that hand.  I will never be able to play the piano (never a problem anyway) or type with that hand and the type and style  of brush work I can do is still limited by this long-ago injury but I have moved on over the years. The majority of art work in the cookbook was adapted from projects before I broke the arm.

But I was left with this cookbook for my kids and for several years I have been going to make copies for all my grandchildren.    First I thought I would add some recipes and update others.  But I knew if I expanded the project it would never get done. 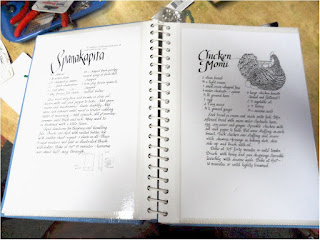 So I scanned all the pages and resized them to be consistent and while I was scanning and resizing, Vivian was trimming the pages and putting them into albums. It took the better part of two days but we have enough pages for 6 books for grandchildren and two for other family members.  Without her help I would have never finished.   It is a big FINISH and it is now on a disc in each book in case it is wanted by great grandchildren in the future. 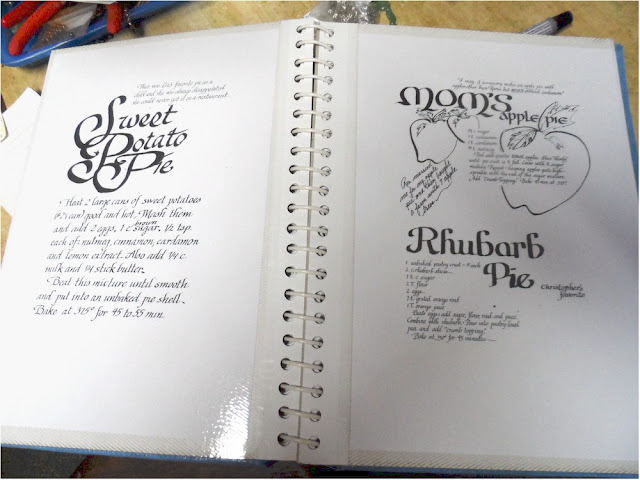 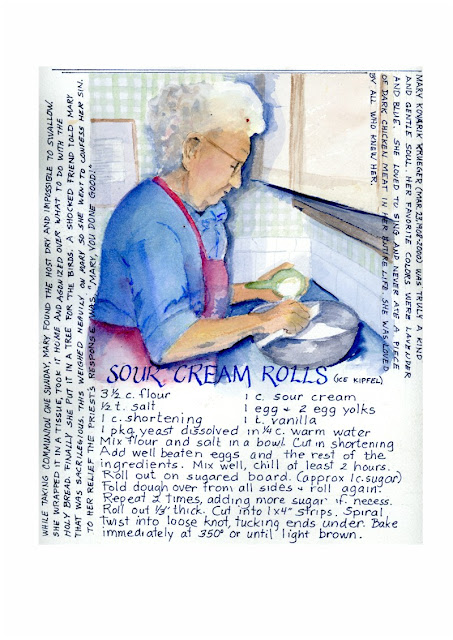 I also included copies of family recipes I did for my husband years ago... One of his grandmother mixing sour cream rolls .......

and one of his grandmother and her recipe for paprikash 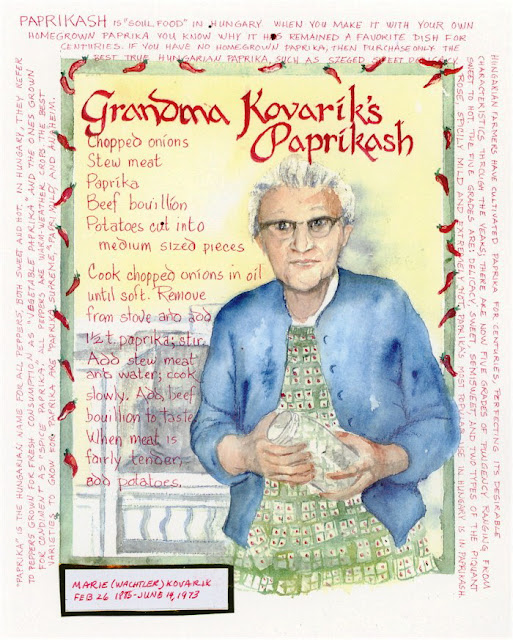 Some of these recipes went back to the 50s and I was amazed how many I still use on a regular basis.  In fact one son just called last week for the pickled egg recipe.

And my favorite of my teenage son who went on to be a gourmet cook. 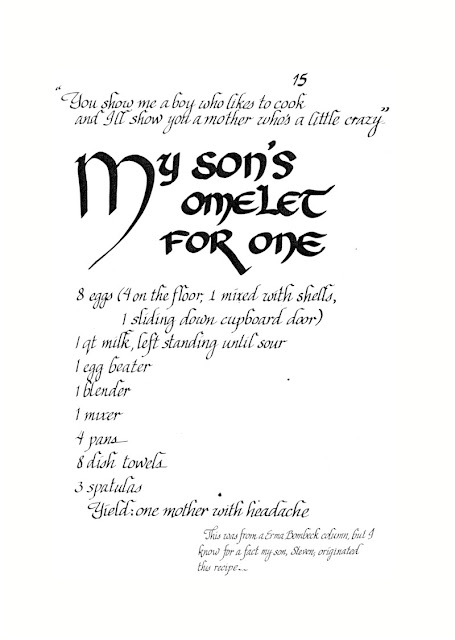 I am on the mend now but since the first of the year I've had two root canals and a wicked spell of cold/flu.  I also got to go CA to visit dear Susie W and recuperate on her couch.. more on that later.
Posted by Gerry Krueger 5 comments: 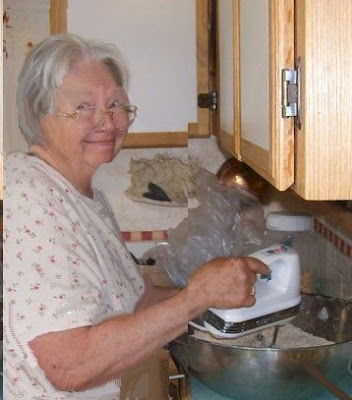 I'm about to start on a project that I need a picture of me in the kitchen and am going to use this one.. I'm making the topping for apple pies..

I have to confess that this picture is not exactly accurate.


The last time I used this picture I decided to do a little photoshop enhancing. I did a rather major tummy tuck,, perked up my boobs and did away with the double chin.. 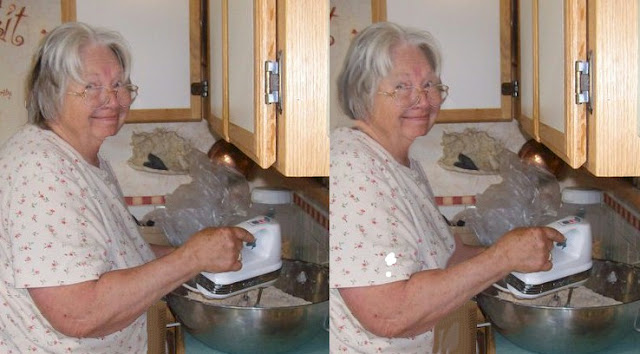 So when I brought the picture up again I wondered why didn't I do something about the shaggy hair cut and the hair hanging in my eyes???  So with the flick of a computpr tool I tidied up my hair and figured while I was at it I would do something about the saggy arms. If I keep enhancing this photo every time I drag it out, pretty soon I'll look like Barbie. 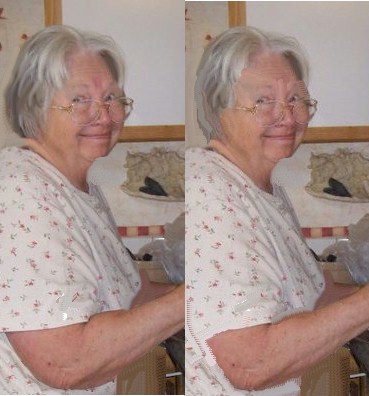 Finished the garters...one to keep and one to toss.  They and the guest book are going into the mail on Monday. 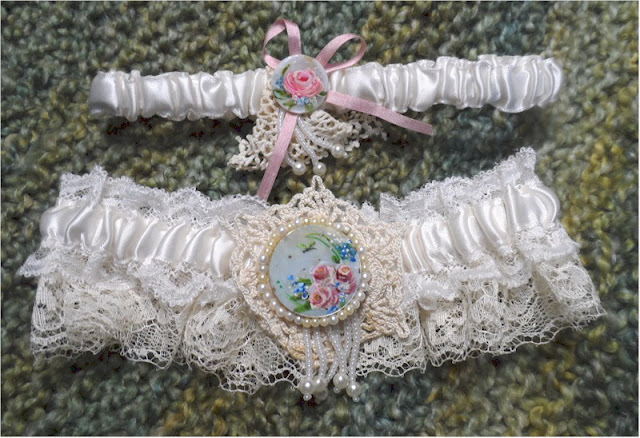 Now there is only one project for the wedding to finish and it is top secret and will take a while... a hint:  it involves a lot of pictures.. 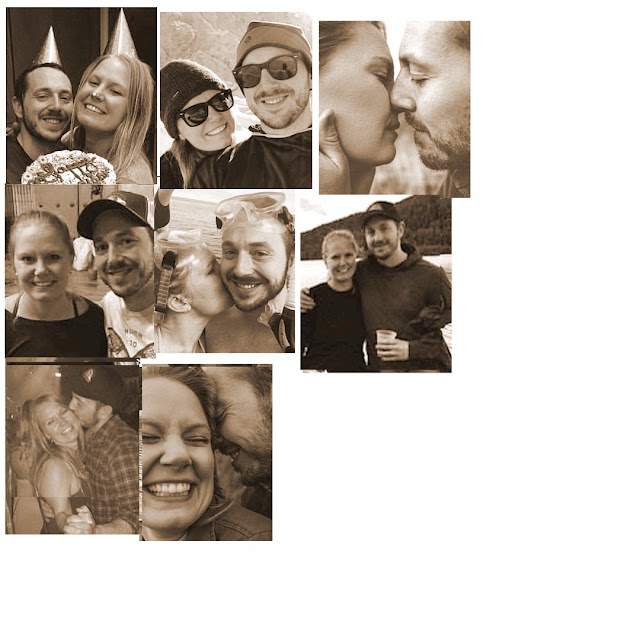 I finished the antique lace cover I made for my granddaughter Madi's guest book for her wedding  in March.  I'm so happy to be able to contribute to the big event.  She is my oldest son's only child.  The laces are all from my most treasured stash and the button on the front is also an antique which I hand painted. 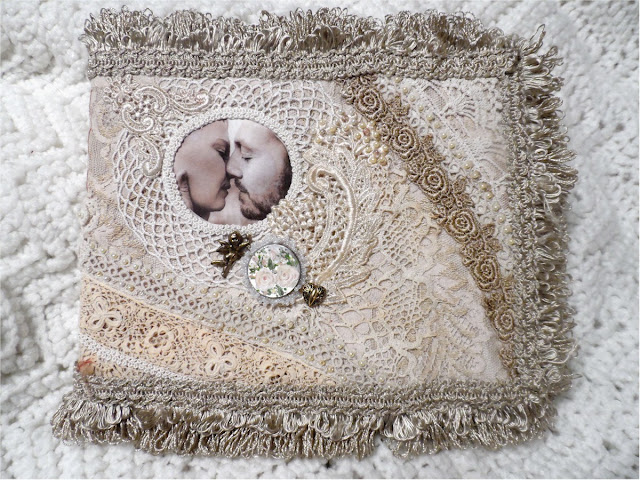 Here is a view of the back.  Unfortunately all of the beadwork does not show up in the photo.' 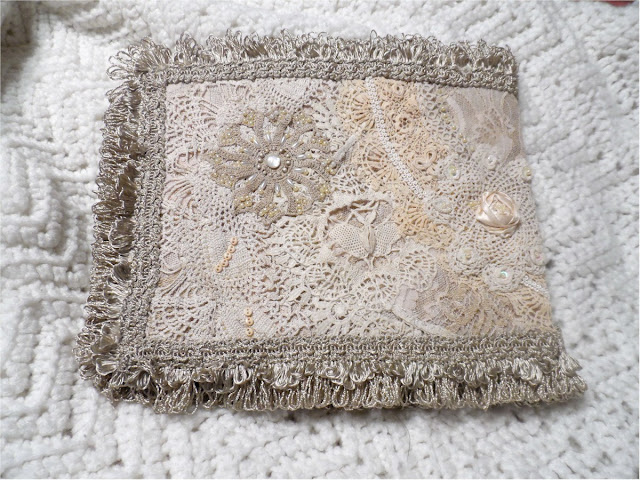 It opens nicely and lays flat. 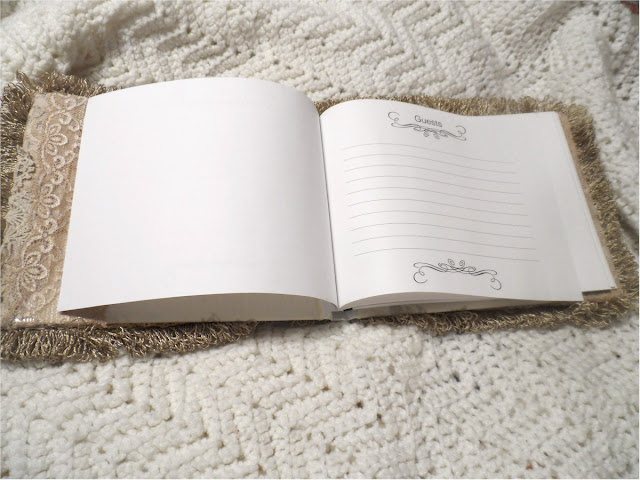 I tried a new technique to anchor the cover to book.  In the past I have used filet crocheted lace to attach  a cover.  This time I bought cream-colored, knee-high nylon tights and cut a length that would slide tightly over the cover.  Then I anchored the finished cover to the nylon.  It works beautifully.  The nylon tight section stretches tightly over the entire cover and on the inside is  barely noticeable.  Very tidy indeed. 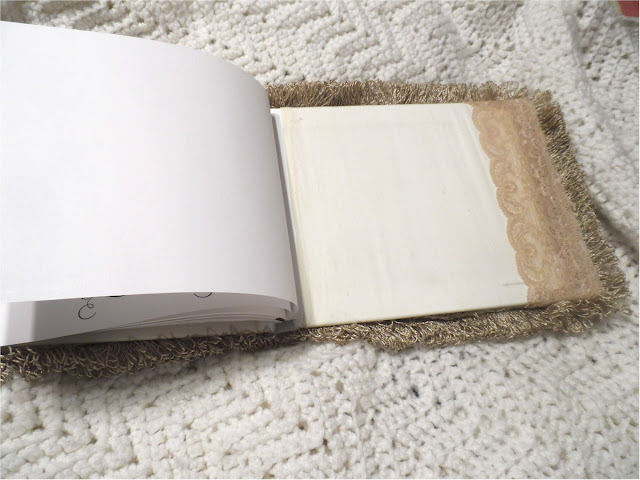 I blogged about trying this technique October 22nd when I started this project not knowing if it would work... delighted it did.  I can see great possibly for this technique in other book making applications. 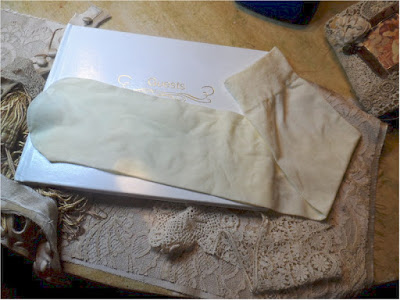 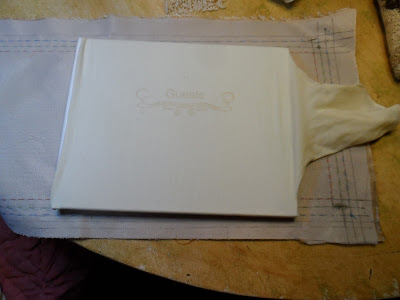