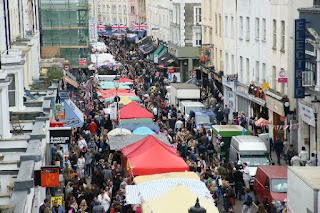 Whether it is called a thrift store, street market, bazaar, antique fair or souk, etc.....I love it.  My initial bucket list  was to see the Grand Bazaar in Istanbul, Portobello Road Market in London and Mache aux Puce in Paris..  I have seen them all and a few more....Portobello Market being the favorite by far.  A close second was the night market in Chaing Mai Thailand and of course Susie Wolfe took me to the Rose Bowl Flea Market in Pasadena CA.  When we travel DH and I never pass up a farmer's market either. 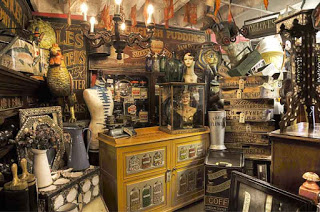 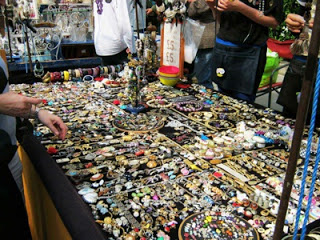 But now after doing an internet search I have expanded my horizons and my list of famous markets, bazaars, etc.  is much longer... DH has always wanted a pastrami sandwich from Katz's Deli in NY and if we get there I will get to Hell's kitchen flea market.  and if we get to go on a Baltic cruise we could start in Berlin and that one would be doable. I have always looked for antique buttons, unusual beads and vintage handmade lace.  All small and easily packed but even if I don't find anything I just love the hustle and bustle of a market and the jumble of goods and the thrill of the search.

Portobello Road (My favorite)
WHERE: London, UK
The world’s largest antique market. Spanning nearly two miles, more than 1,000 vendors sell everything from movie posters to clothes, bric-a-brac and household goods in the markets four sections. There are around 100 antique stores, but coffee and fresh food are also close at hand if a break is needed from bargain hunting. Portobello Road is open daily, but Friday and Saturday are busiest, so arriving in the morning is a good idea.


Rose Bowl Flea Market (Attended)
WHERE: Pasadena, California
Running for over 45 years, this unusual flea market is held every second Sunday of the month and admission prices start at $9. There’s something for everyone from vintage merchandise to arts and crafts. Vendors start packing up from 3 pm, but last-minute bargain shopping lasts until 4:30 pm.


Brimfield Antique Show
WHERE: Brimfield, Massachusetts
America’s oldest outdoor antique market is a six days long flea market extravaganza. Held only three times a year, always in May, July, and September, more than 4,000 vendors and 50,000 buyers descend on Brimfield, about one hour drive west of Boston
Marché aux Puces  (Attended)
WHERE: Paris, France
The name says it all as Marché aux Puces translates as “Market of the Fleas” (and it’s where the English term is derived from). A class of its own, the 150-year-old market is located in the north of Paris and actually comprises 12 separate markets that have grown together over time. In the labyrinth of alleys and stalls, you’ll find both old treasures and new French junk every day of the week


Mauerpark Flohmarkt
WHERE: Berlin, Germany
Someone’s trash is somebody else’s treasure certainly holds true at the Mauerpark Flohmarkt where mostly private sellers divest unwanted stuff. Open every Sunday, this flea market has a real local feel,   Besides the treasure hunting, live bands and street food stalls will make you want to spend an entire day there.


El Rastro
WHERE: Madrid, Spain
Madrid’s oldest and biggest flea market is held every Sunday and public holiday. El Rastro features market stalls along the two streams, Plaza de Cascorro and Ronda de Toledo, which sell mostly new clothes while the stores in the side streets are reserved for antiques, collectibles, and handmade items.


Grand Bazaar (Attended)
WHERE: Istanbul, Turkey
In existence since the 15th century and one of the main attractions in the Turkish capital, you’ll find plenty of treasures like spices, traditional pipes, pashminas, carpets, silk clothes, lamps, ceramics, and of course, Turkish delights and other sweets in the bazaar. If you don’t know how to haggle, this is the place to learn (and best to learn quickly), as bargaining is part of the culture and expected here.

The Souks
WHERE: Marrakech, Morocco
When locals speak of the souks, they mean the markets in the heart of the medina just north of the Djemaa el-Fna  The souks of Marrakech will stimulate your five senses with colorful displays, buzzing sounds, exotic materials, delicious food, and sweet-smelling spices.

Hell's Kitchen Flea Market
WHERE: New York, New York
At the Hell’s Kitchen Flea Market, designers, residents and tourists alike hunt for vintage clothes, home decorations and jewelry every weekend from 9 am to 5 pm The market also gives 25 percent of its profits to a charity that helps artists in this increasingly costly neighborhood.


Located in the quiet suburb of Sant Cugat,   The best time for bargain hunting is the first Sunday of the month which is delivery day and when organizers put on live music, Catalan specialties food stalls, and children’s entertainment Chiang Mai Night Market  (Attended - second favorite)
WHERE: Chiang Mai, Thailand
The night bazaar is a can't-miss part of the Chiang Mai experience.   Set up time is around sunset (usually about 18:00) and shopping goes on unabated until about midnight    Don't forget to peek down the little sois (alleyways) and arcades along the way,  Great handcrafted items.

Monastiraki Flea Market
WHERE:   Athens. Greece
During the week the Monastiraki Flea Market in Athens is similar to the Grand Bazaar in Istanbul: popular with tourists.On Sundays, however, the larger shops close and merchants bring out tables and carpets, selling all kinds of vintage goodies on the street.
Posted by Gerry Krueger 3 comments: