I promised myself resolutely, irrevocably, that I would not start another project OR even think about another project, until the suffrage quilt was done.  But alas I have failed again and am a wimp of major proportion (literally). 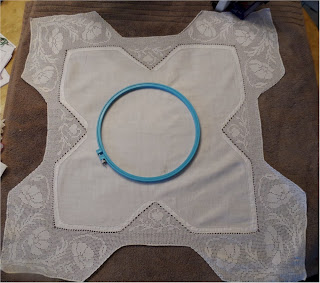 Last Saturday my CQ stitchers met here and brought their collections of hankies which were amazing.  I had wanted to save mine until after the suffrage quilt and use that fabulous table cover which is good sized... But then I thought "maybe just a little piece".............. but then again how many hanky quilt will I do.  I had better do the table cover to begin with... Sooooooooooo  I got it out, pressed it, and added the fusible tricot to the back of the linen...

I placed hoop there to get a feel for the size of center motif I want to do... This is really an incredible piece of vintage linen and I love being able to get it out of the bin. 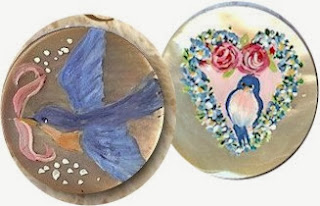 Last spring I painted some buttons for Valentine's Day which had a heart of forget-me-knots.  At the time I thought would be fun to do something similar in embroidery and ribbon work.  It would make a great focal point for the hankies and wouldn't take long... And of course I have been wanting to do bluebirds and I can do them off block and add after my suffrage quilt is really done.... Cathy K posted some ribbon bluebirds on Pinterest that made me want to do them.  In fact I may add 4-5 bluebirds 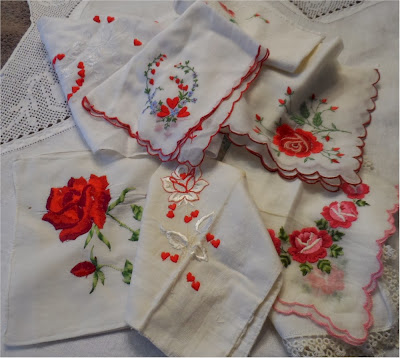 When I sorted my hankies I had a LOT of hearts and roses.  I don't really want a Valentine quilt but I do want to aim for romantic.

So since a central focal point will be on a vintage damask napkin, it will be easy to tote about and the actually attaching the hankies can wait until after the suffrage quilt. 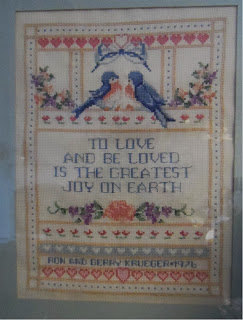 This piece of counted cross-stitch which I stitched almost 40 years ago will definitely be my inspiration.  And I'm off and running AGAIN!!! 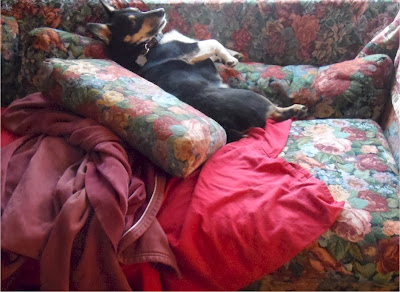 Most dogs would  be grateful just to be allowed on the couch... But Morris has to rearrange all the pillows and blankets on the couch every time he wants to nap there.
Posted by Gerry Krueger

Whew, I'm so glad you started another project. I'd hate to be the only one that has at least 100 projects on the go. Well, maybe not quite 100 but a lot. I did finish the Hobbit quilt and now I'm working at finishing up a hexie placemat quilt that I started to use up some of that "what was I thinking!" fabric. And the copper and teal etui box has been on my mind - so hopefully I'll get that out and do some more on it. I got stalled after I finished to top but I think I have an idea now of what I want to do. Have fun with your hankies :).

Not hopeless -- passionate! I love your passion, and I'm sure I'm going to love what you do with the little bluebird theme, too!

I know the problem well! I Just can't stand to have just one thing going at time! Your handiwork is so inspiring that you don't help the situation either! LOL

yesterday my daughter came to discuss what she wanted on her CQJP for next year so I showed her the web site, she was thrilled with all your pieces, you really stole the show and felt I had to let you know how much we both love what you have done and are still doing.