Julia Child and her deconstructed turkey....... 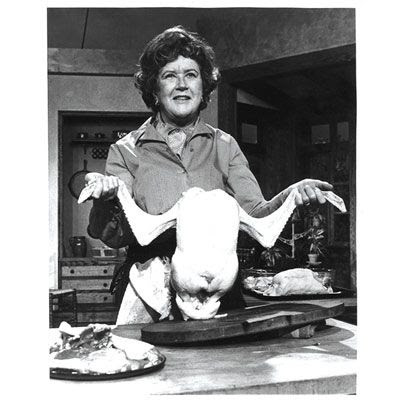 Some years back I saw a rerun of a Julia Child's television show where she demonstrated her "deconstructed turkey" and I thought it was absolute genius....  I have not cooked a whole turkey in the oven since.... You can still google it and see it.

We have turkey often as it is cheap and so versatile  but it is time consuming and messy to cook the whole turkey ( and messing up my oven and kitchen) and then cooking the carcass separately.  The way I do it is not only easy, it is all done at the same time with no messy kitchen and oven. 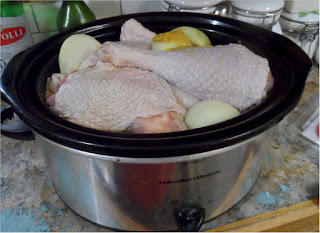 In fact I took Julia's deconstructed turkey one step further and adapted it to my slow cooker.... A breast, 2 thighs and legs fit perfectly in my largest slow cooker. I add onion and herbs and beer.... Yes beer...actually stout beer. I had watched a turkey roasted on a open spit on a TV show and it was basted with beer mixed with butter and herbs. I have been using beer ever since.  There are numerous similar recipes on the internet. 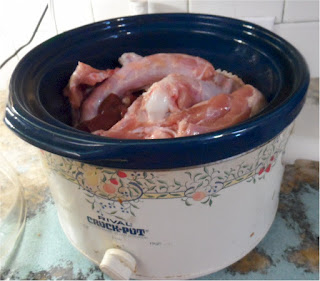 The back, wings etc. I put in another slow cooker....the "parts" cooker.  Usually I use this  meat bits and broth for soup but I have a good supply of turkey soup still from Thanksgiving.  The meat and broth from this I will pack in smaller amounts and use in turkey salad, turkey crepes, and in place of chicken in my favorite Chinese chicken dumplings.

I made the corn bread stuffing yesterday and it is in a casserole in the frig.  About an hour before dinner I will baste it with broth from the "parts" slow cooker and bake it and then  use the rest of the broth to make the gravy.... Then I will use up most of the turkey left to make freezer dinners for January...  I love frozen turkey dinners with all the trimmings because (believe it or not!!) there are days I don't feel like cooking...

I must pass this information on to my Resident Chef and perhaps he'll try it. Wonderful picture of Julia!

Perfect advice for the frozen bird in my freezer... and I have 2 slow cookers, too!!