Never say die in the kitchen!!

When I am trying to perfect a recipe I just keep doing it again and again... tweaking the ingredients, temperatures etc. until I get it right... Well occasionally I do give up but not this time...

This is my husband's official 2018 Christmas Stollen and I couldn't be happier... just like his grandmother used to bake for him.  This it absolutely... no more tweaking....have this one nailed!!!! 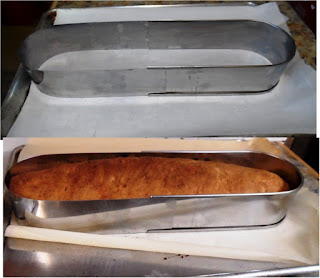 Last month's attempt was an improvement over several attempts before before but it rose unevenly in the stolen mold and was almost burned on the bottom before the interior was done.  And the candied fruit was pretty much concentrated in the middle.

So yesterday I did more tweaking.. I was more careful about the proofing temperature and more careful about shaping the dough.  Both worked well..  Then I set the oven temperature at 400 degrees and immediately when I put the stollen in I lowered it to 330 degrees.  So it had an initial blast of heat for the rise and then a long bake to prevent overbrowning the bottom. 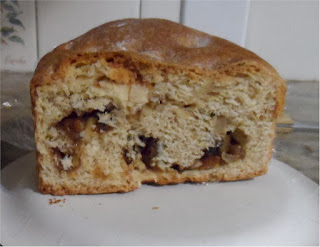 Then I found a clever solution on the internet for solving the fruit distribution problem.  Ordinarily recipes tell you to roll out the dough and spread the candied fruit   and roll it up...  But when doing this the fruit shifts.  I found a video where you roll the dough out about 1" thick and use your finger to make deep dimples or indentations in the dough.  Then spread the fruit out and as you roll it out the fruit slips snugly in the dimples and ends up throughout the roll.  Why didn't I think of that?

The other day DH came home with the zipper on his jacket sprung at the bottom... I figured by the time I separated it I would need to replace the zipper....but I googled the problem and lo and behold one person suggested liberally applying dish soap to the teeth on the zipper and giving a good tug... worked like a charm and the zipper teeth seem unharmed... Google saves my day often .

Another tech miracle this morning...  Also my DIL called me from a cruise ship in South America this morning on the new What's App she put on my phone.  It was a video call so I could see her live and it was FREE... absolutely amazing.  Of course she has to send me an email when she is going to call as my phone is usually either dead, mislaid or not turned on...
Posted by Gerry Krueger

You are amazing and so is google!

Morning Gerry .... always love your kitchen tips. I made your banana loaf recipe on
Saturday ... tweaked it with a few chocolate chips (for my chocolate loving daughter ;)). If she's lucking there'll be some left when she arrives on the 28th.

Hope you and your family have a safe and happy Christmas and I look forward to your blog in the new year.. All my best wishes, Helen White

Gosh I wish computers had smell-o-vision (but then again...maybe not!). Looks soooo good!