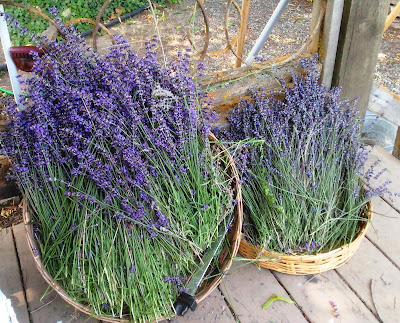 I've been obsessed with the lavender the last couple weeks.  It is especially lovely this year  and it's all over the garden and beyond.  I have so much of it because when I had the nursery every time I planted a  propagated rose I planted 3 lavender plants  around it so the deer would leave it be.  Deer do not like lavender or most furry, grey or  strongly scented plant such as sage, etc..  It worked but over the years the roses in the wild part of the garden gradually died off from neglect and the lavender thrived so I have huge patches of it here and there and everywhere.  It's blooming time varies in different areas of the garden so I have it over a long period of time. The variety is Hidcote and it is the darkest purple of the lavenders.... 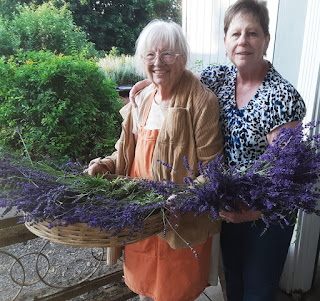 For years a group of ladies from a local church used to come and pick laundry baskets of it  and dry it to sell at their Christmas bazaar.  But as they aged they finally were unable to scramble about the garden. But the lavender continues to grow and thrive.

This year I have picked baskets and baskets of it and it is drying in the barn and will give bunches of  it as gifts all winter... I have even invited friends in to pick as well and we haven't even made a dent in it
The flowers in this bouquet look blue but actually are shades of purple.  They include lavender, salvia, and perovskia.The mauve flowers and the small maroon flowers are two of my favorite perennials.  Can you identify them??? 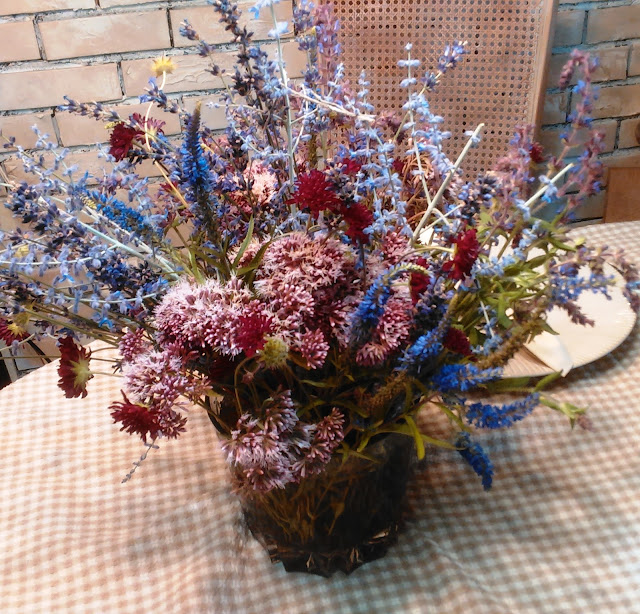 I love the look of lavender but the scent sending my allergies right into orbit.

So lovely! One can get lavender here in the nurseries but it doesn't last outside -- our climate is too cold and our growing season too short here on the Alberta prairie. If I lived on Vancouver Island, it would be quite a different story -- the gulf stream there produces warmer, wetter weather and...fields of lavender!

I’ve been putting a small amount in a strainer for Tea and then pouring water over it. I usually put another teabag in the water usually the caramel one. It is very tasty. May i get some from you? I’m in Portland now on my way to California. What did you paint today?