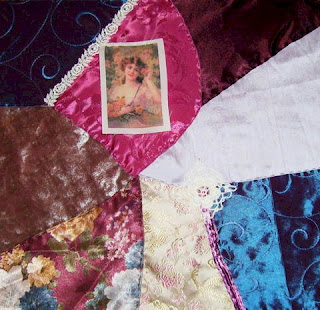 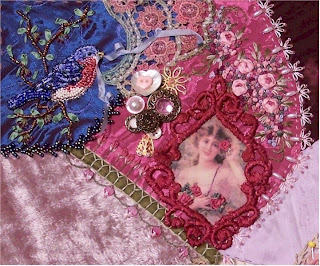 If I had to choose my favorite position in an RR rotation, I would say it would being first to work on a block. There is something decadent about getting a blank block and having all that space tempting you. This block was part of a 2007 Encrusted RR and belonged to Cobi in Leiden Netherland. It arrived pieced with gorgeous velvets and satins with an image of a lady pinned to it.
At the time I was experimenting with beading from pixalized images so I beaded the bird first... I've not beaded from an image in a long time and if there's room on Jo's COC block when it arrives I'll do a bird or flower. At the moment I am blockless which hasn't happened in a long time.
This block went from me to Leslie in CO, Ati in Norway, Maire in NY and then back to Cobi. Since it was an encrusted theme there were no holds barred. I always sent to Leslie and knew however over-the-top I was, she would raise the bar (and she always did...) Below is how it looked when it returned to Cobi... I'm hoping someone will start another encrusted RR in 2009. 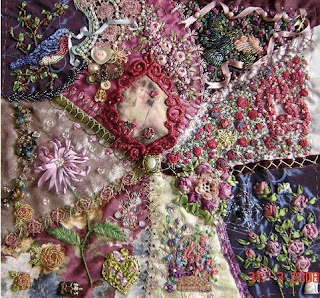 Note: For those not familiar with CQI, it is a group of woman from all over the world who love crazy quilting. Five at a time sign up for a round robin and make a block. Each block travels in rotation until it is returned after all members of the round robin have worked on it. It is great fun and fellowship..
Posted by Gerry Krueger

What a very pretty block. I'm not fond of that much encrusting on my own blocks, but it certainly looks pretty on this one. I like what you did with the silkie, too.

Wow! This block is absolutely gorgeous! You ladies did wonderful work, I like your beaded bluebird, as well as the other work!

Such a gorgeous block! I absolutely LOVE the beaded bluebird! Just beautiful! Makes me think I want to do a bluebird block!

I love it. The whole block is wonderful but I especially like your beaded bird.