Incredible week for new birds on the farm..... 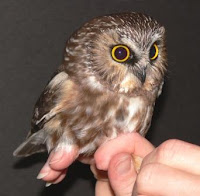 Wednesday when I went out in the morning to feed the chickens there was a tiny owl trapped in the chicken house.. It was so tiny I could hold it in the palm of my hand...I was sure it was a baby fledgling...but not!  It was obviously in distress and I wasn't sure if it was injured or just frightened ... Luckily we have a friend who lives close who is an owl expert and I called him immediately.. He has had over 20 years doing owl research and owl rescue.  He came and picked up the dear thing.

It was an adult Northern Sow-whet owl.  At maturity they're only 8" tall and weigh less than 4 oz.  Since it is nocturnal  we had no idea we had them on the farm.. They eat mice and we have plenty of those for sure. The great horned owl is a frequent visitor but it's huge and noisy.. 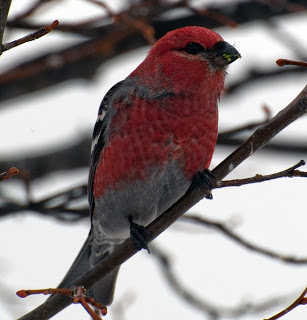 AND on Monday we had another new arrival.... a bunch of Pine Grosbeaks...  The adult male is striking in its flaming red feathers with black and white accents.  He was like a valentine be-bopping around my mountain ash tree.

I am doing some stitching but have been mostly trying to get organized for the next round of CQ classes.
Posted by Gerry Krueger

Great photos Gerry! The owl is so adorable. I don't think I've ever seen one this small. We do on occasion get them larger in our area but rarely see them.

what a treat to have such visitors to your home, so good you saved the owl and I expect he is once again flying free and taking care not to go in the chicken house again

Owls and loons are my favourite birds. The owls because I just love their faces and loons because of their eerie calls. Your owl is too cute and the grosbeak is beautiful. Hard to get much stitching done when all the birds start arriving I bet.

That tiny owl is just adorable .... who knew they came so small?? The red bird is gorgeous ..... should really cheer up the winter landscape.
SusieW

I didn't know there were owls that small. He/she is cute. I don't imagine his hoot is very loud. I see lots of different birds around here in the summer but don't see many in the winter except for cardinals. Or maybe I'm just not paying attention and should start. I think the clowder of barn cats scare them off.

Wonderful to see that cute little owl. I spend a lot of time looking at the birds who frequent the bird feeders, but I haven't had one as colourful as the pine grosbeaks.

So cool! Love seeing new birds! The owl is really something!

Just a couple weeks ago, I read an article about northern saw-whets being heard and seen in the Twin Cities of MN. It was considered to be a little unusual. How lucky you are to have the grosbeak and little owl visiting.

Wow!!@!!! I think you just won the Bird Olympics!!! Plus the Bohemian waxwings too! I believe it's all a good omen for you my dear!

Your bird finds are so wonderful. And what a treat finding the little owl, I hope he was able to go back into the wild. Thanks for sharing.