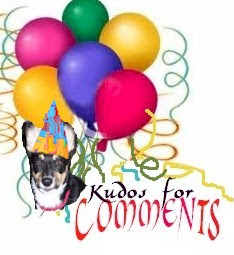 I come close to posting daily and often find I think of something that happens should be posted but I never get it done.  Even my DH who never reads my blog will say "You should post that!" when Morris has done something bazaar AGAIN!!

I felt #1000 was worth celebrating but I had just had a giveaway... I decided not to do another because all these people sign up hoping to receive something and are disappointed.  I decided it would be much more fun for to to give a prize to someone not expecting it... Thus "kudos for comments." 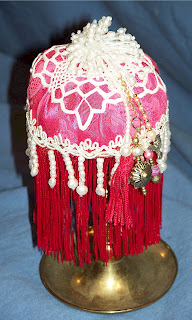 I went back through my comments list and the reader who made comment #1000 was Cathy Labath and as a BIG thank you I am sending her a pincushion...  In fact I really like this idea so "kudos for comments" will appear regularly giving me a chance to thank those who take the time to comment and make my day.....

Onward to #1001
Posted by Gerry Krueger

Congratulations Nu Mom!!!
I don't know how you post so much. I don't seem to be able to come up with interesting ideas for posts so I don't do it, even though I have been very busy
Hope to see 1000 more from you
Lauri

Congrats on 1000 and we hung on every word of them. Over time, you have given excellent advise and shared such interesting pieces about you and your life.

Yes! a surprise for someone that comments is excellent. So many people leave comments only to win. As a fellow blogger, I appreciate comments, even if its one word.

I just wanted to say that I really enjoy your blog and am learing alot from you. Jane in MO

Gerry isn't it amazing that through a blog you have contact with so many CQ-ers all over the world? And have met so many friends with the same passion?
I am amazed by that fact and couldn't think my everyday without blog reading ;-)
Congrats with the 1000st post and up to the 2000!!

Congratulations!! I for one am glad you made all those posts as that is how I "met" you .... then we've gone on to become dear friends. You do have lots to say (really good stuff) and I'm sure sweet Morris will give you blog fodder for years to come. May post 1001 be just the beginning a continuing adventure!
Hugs .... SusieW

Thanks for a 1000 great posts, Gerry. More please!

I think your Kudos for Commenting is brilliant! What a great way to celebrate your 1,000 post. Congrats!

Are you kidding me? (I hope not). I'm so excited! (I'm never lucky enough to win anything and to win one of your wonderful pincushions is the icing on the cake).
Congrats on 1000 posts!

What a wonderful way to celebrate! You continue to do these posts and we will continue to be here reading. Thank you for all the knowledge you so willingly share with us.
Deb

What a nice idea for your 1000th post. Your blogs are among of my favourites and I check them every morning. I learn so much but I must confess that I'm really excited when there is a new Morris post. Gotta love dogs with "personality".

That is awesome....happy 1000 posts!!!! My husband doesnt look at my blog either...or even understand how folks could find time to blog, but when he sees the printed versions of mine each year, he really enjoys them :)
Happy milestone to you...and congrats to your 1000 comment winner too! what a lovely gift!
cheers~

Congratulations and thank you for the 1000 posts! Looking forward for the next thousand and more!
Hugs,
Annamaria

Hi Gerry,
WOW! Congratulations on your first *Grand* of posts! You are a *Bank* of information, LOL! I appreciate all of your many talents and especially your generousity to share them all with us that come to read your blog. Ive come to read your blog many times, but made the mistake of not leaving comments. Bad mistake! I will definately change that habit from now on, LOL! Lucky Cathy L.
I enjoyed seeing you again and taking your button painting class in Wichta, KS. Hope to see what you will do with that huge MOP button.
Love & Hugs, ~Ing in S. Cali

Gerry, the pincushion arrived Wed. Thank you so much. My 6 yo GD was over when I opened the box and thought it was so beautiful. I told her a lady made it and she wondered if the lady that made it was a fortune teller. Fortune teller? She had seen a show with a fortune teller who was dressed in fringe and beads just like the pincushion.