They're often referred to as "button clusters" but most often look like "button dumps". A pile of buttons plopped on to fill a space and most often without much interest . Even worse they are contributing nothing to the design of the block... I really cringe when I see this missed opportunity...

Using buttons is something that Sharon Boggon excels at and on the left are 3 examples I photographed at her workshop... Look closely at them... Notice contrast, contrast and contrast... She has used great variety in size, texture, shape, color, support details AND direction... These are buttons that are making a fabulous contribution to the block they are on...

Also noticed how she has added various sizes and colors of beads to add contrast and give the arrangement direction.. On the middle example she has added bits of lace as well. The beads and lace both act as support elements for the buttons adding excitement and shape. In addition if you have buttons with larger shanks the beads can be used to hold the buttons in position.

Each arrangement of buttons has a direction.


Just after I got home I heard from my friend, Susie W. who sent me the following photo of her Hearts to Sendai block... She had never been too enamored of button clusters and she was doing her very first one to fill the upper right hand corner... Being an artist herself she instinctively knew it wasn't working... It was too much the shape of the SRE on the left and she felt the rose button was just too much..

So she sent me a photo and we had a chat about it.... I told her forget "cluster" and think "trail" and also add contrast in all elements and add beads.... Also I personally loved the rose button and felt it was the button above (see arrow) that needed to go... 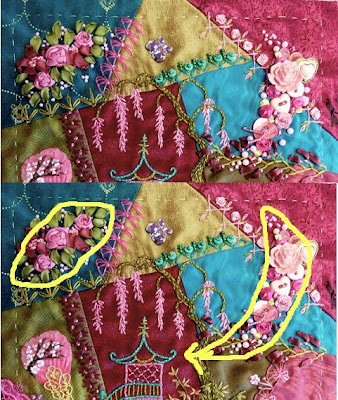 Well she reworked it and look at it now..

She did indeed think trail, added beads, lots of contrast and variety... It just "sings."

I just love what she did and now the button trail has a direction and leads the eye right down into the center of the block...becoming a critical part of the design of the whole block.... 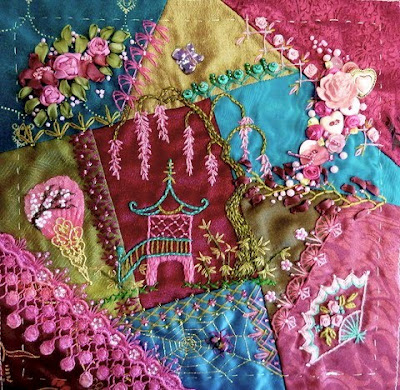 Here is a picture of the entire block which is spectacular... Susie is a stitcher "extraordinaire". Check out all the lovely motifs and seams... I am willing to bet she uses many more button "trails" in her work now... And Heaven knows we all have lots of buttons.....

Thanks to your help, Susie’s block went from beautiful to Gorgeous! You have such a great eye for things and are also a natural teacher! Big hugs, Cathy

I've observed Sharon's use of button clusters in the past. This is a great post Gerry - really shows the difference. Am working on my first cluster as I write. Really enjoying these posts.

What a pleasant surprise to see my grandson's photo on your blog. That button is going to be wonderful. Thanks for taking the time to do it. Yes, he is adorable!!!
Warm regards,
Marilyn

Thanks Jerry great lesson you made something confusing perfectly clear

Hi Gerry, great post. Buttons are hard to manage for me.

I got the raven button today; it's perfect! thank you!

Hi Gerry, love your post! I also do cq work and have a large assortment of buttons - this sure helps me and gives me new ideas how to use them!
Lynn in Ohio/Florida